OHAFIA, Abia, Nigeria – The upshot of the APGA ABIA North ward tours to Ohafia Local Government Area  was the outstanding revelation of Prof. Greg Ibe upward spiral in the public and political space.

Without any fears of contradiction, he has been acclaimed as a folk hero both at home and in the Diaspora for his developmental and very visible altruistic agenda, empathy to Ndi Abia over the  past decade in education, health sector vide medical outreach, COVID interventions et al.

Previous tours to other LGAs like Bende were received with a standing ovation. The  one to Ohafia this week was an icing on the cake,  given the ecstatic  and very rousing reception accorded the delegation of APGA  chieftains led by Ambassador.

Also in the star-studded delegation is the APGA Women leader, Mrs Amarachi Ndukwe- the indefatigable party faithful, an awesome grassroots mobilizer always the first to arrive to arrive at the campaign office. Chief. Dim  Uchenna  former Commisioner of Culture and Tourism, and Mr. Chijioke Orji Nwoke, the energetic APGA electronic media journalist were all their too to expand the praxis of the formidable Greg Ibe outreach.

The very warm reception accorded the delegation was soul touching as the party faithfuls who had been waiting for a while broke into a rhapsody of songs, hymns and Ohafia native dances reserved for celebrities. After the introductions of the APGA team by Ambassador Onukwubiri, the Chairman  of Ohafia LGA APGA ward, Prof John Osonwa {also Director APGA Campaign Headquarters} took the centre stage to articulate the raisson d’etre of their solid choice and tower of support for the Greg Ibe gubernatorial brand.

He robustly affirmed that the dominant civil society and vast majority of Ndi Abia are solidly behind Greg Ibe because of his manifest record of benevolence, magnanimity , patented integrity and public service development. The EBEMOHA community, ipso facto Ohafia were saved from untimely deaths during the CORONA virus pandemic.

And many senior citizens were issued free prescription eye glasses in his constituency. Speaking in the same vein, Dr Uduma Okoro Ezikpe a staunch APGA activist, and Capt. Awa (rtd)  all spoke glowingly of their passion to overwhelmingly deliver their constituency for APGA at the gubernatorial elections coming up in February.

Inyom Ngozi Onyioha-Orji took the microphone and turbo-charged the party faithful with tactical words of exhortations as she enlightened them on how to avoid the wily and dodgy propaganda of the other political parties. She pointedly asked them to ignore the distraction of fake news from APGA detractors. To reinforce her admonishment, she  accompanied it with a very instructive APGA jingle and sing song, she composed to the delight of the crowd. The session was rounded up with a prayer session imploring and affirming the divine injunction that Governor Greg Ibe would be sworn in this May 2023 in Jesus mighty name.

Next stop at Ohafor, was a testimonial of ovation and plaudits for the APGA brand by Chief Uduma Ibe- the ward chairman  who could not hide his feelings about the change mantra,  which he described as  sign of the time. Chief Olugu Kalu, the State Vice Chairman, Abia North reiterated the motive  and force of the choice  in Greg Ibe as the “blue eyed boy” of Ndi Abia.

According to him, there is no room for any body to sit on the fence. He assured that OHAFOR ward has already mobilized to deliver block votes up to 100% to APGA. For him, the people are spurred by the verified fact that Greg Ibe  maximally prepared  for executive, leadership in government house courtesy of his myriad of professional, academic and developmental exposures that has impacted positively on the daily waking and working lives of Ohafor people. The toxic narratives of Greg Ibe being  a “godson” to some godfather was methodically dispelled by the team.

At Okon–Aku the staying power of “Onye aghala nwanne ya” resonated into full bloom as the ward chairman Chief Nmecha Udensi, scion of the well revered UDENSI  political dynasty, kept their morale and spirits together and high up as they patiently waited for the delegation. No sooner had they sighted us  that they broke out into native Khumbaya genre of celebratory and solidarity songs that almost pulled down the roof of the town hall, venue of the  event which was jam packed to the brim.

The State Party Secretary Ambassador Okwubiri, deployed his well honed, eloquent and velveteen oratorical skills extolled and worked the audience into an excited adulation of Pro. Greg Obi. He exposed and demolished all the fiction, lies and beer palour tales being fabricated against Prof Greg Ibe.  Inyom Ngozi Onyioha-Orji, and Abia zonal  state, Vice Chairman  urged all the party faithful to be wary of the subversive antics of the detractors. All their PVC’s must be obtained getting ready for  change. As usual the complements and generous heart of the party elicited a volley of applause from the grateful party members.

Like previous encounters at the ward tours, the acclamation, cheering and laudation was phenomenal. After the opening remarks and courtesies of the home community, the delegation went straight to the point, stressing  that APGA is their adopted party  and that they will vote en-bloc. They have consigned ugly memories of the hitherto mainstream deceiver political parties to the dustbin of history because they are no longer comfortable with the old order of rusty sleight of hand political hucksters. 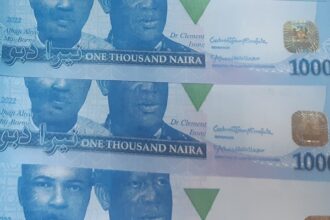 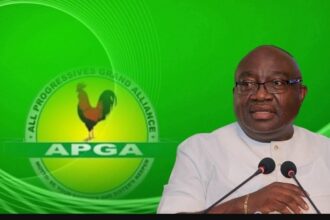 This is time for APGA to take over Abia, says party chairman