Lagos State Governor, Mr. Babatunde Fashola has reinstated that the current problems confronting Nigeria are man-made, borne out of ethnic and religious misunderstanding and intolerance, stressing that he and his colleagues have decided not to join those who speak ill of Nigeria.

Fashola who spoke while receiving Prelate of the Methodist Church, Dr. Chukwuemeka Uche, said ethnic and religious harmony are essential ingredients for peace and progress in the country.

“The problems are created by men and not by God and if men of goodwill arise, they will not only confront the problems but they will overcome them. Our country is at a difficult moment, let us put it that way, because my colleagues and I have resolved that this is our home country and we will not join those who speak ill of this country.
“The work that we have to do is to define for ourselves the kind of future that we want. We must agree on that and once we make that agreement, then we can unite our minds about it. It will be easy to unite our efforts towards it. But our minds must meet about what kind of Nigeria we want. Because that is the basis of dreams and dreams come true”.

Noting that there is need for people to understand that there is only one God, Governor Fashola appealed to religious leaders of all faith to endeavour to bring the mystery of their Faith down to the level where the ordinary man or woman could understand it adding that by doing so they would help break the boundaries of religious intolerance.
“The truth is that we are serving the same God and I hope that many other people, men and women of faith, will help to breakdown the mystery of Faith and make it simpler for people to understand that it is one God and that it is the vehicle of communion that is just different; because that is the easiest way to break boundaries of distrust”, the Governor said.

Citing himself as an example, Fashola told the Prelate, “As I listened to you, I chuckled within me because there is a lot of me that is Methodist. My mother is a Methodist, my Uncle is a Parishioner. Even I was raised in a Methodist school. I was brought up in a Christian home, I attended Church every Sunday. Then at age 20, I was converted to my father’s Faith. But then, reading the two books, I find no difference”.

The Governor expressed delight that the situation in Lagos has been that of religious harmony where almost every family has members of different Faith living together adding, “So, people have been defined here not by how they worship but who they are, how godly they are, how humane they are, how warm and friendly they are”.

He also cited a recent Merit Award given to a Christian by the Ansar-Ud-Deen Society of Nigeria to commemorate its 90th Anniversary pointing out that the man was given the award because he was funding Quranic lessons. “He was doing the work of God because whether he was teaching catechism or Arabic lessons, one thing he is doing is bringing the children closer to God”, he said.

The Governor, however, remarked, “Yes we don’t have religious divide in our State, but we must work very hard not only to keep it that way but to share the essence of our harmony with other states” adding, “When I made my remarks later, I mentioned it was not surprising in Lagos because in almost every home you will find Christians and Muslims there. So that is the heart of the matter for me”.
The Governor promised to assist the Church in Lagos Island with Power supply through the Independent Power Project adding that he has already given directives to that effect. “It is a commitment we have made and I pray that God will make it possible for us to discharge it”, he further assured.

“The Church itself has been a very worthy partner for not only our State as a whole but for our Government. In times that had been more challenging than now, they had been a partner to help us find a way so the least we can do is to reciprocate these gestures”, the Governor said.

Earlier in his opening remarks, the Prelate thanked Fashola for the cooperation and assistance he gave to his predecessor saying he would be pleased to have such cooperation extended to him.” You have been supportive to our Church. You were supportive to my predecessor”, he said.

He said Lagos represents a Mini-Nigeria where all tribes and languages reside in peace and harmony. Present at the occasion were the Senior Special Assistant to the Governor on Christian Religion, Pastor Sam Ogedengbe, from the State Government side and Bishop of Lagos West, Rt. Rev. Sunday Ogunlere, Bishop of Lagos North, Rt. Rev. Jacob Olu Akinola, Arch Bishop of Lagos, Most Rev. Sunday Ajayi and Bishop of Evangelism and Discipleship, Rt. Rev. Edoka Amuta, among other clerics who accompanied the Prelate on the visit. 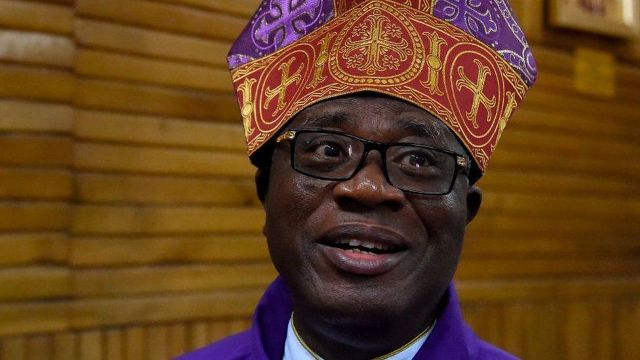