BADAGRY, Lagos  –  Chief Michael Sonayon Kunnuji, the Gagbo Menu Toyon of Ajido kingdom has charged Federal Government to explore cultural heritage of all ethnic regions to promote unity in the country, noting that historical and cultural heritage of the numerous ethnic groups across Nigeria are strong enough to foster unity in diversity.

Chief Sonayon Kunnuji  gave this indication while cerebrating the first coronation anniversary of his traditional title in Lagos.

While lamenting that the culturally rich  heritage of the people of Nigeria is  being killed on daily basis as result of new religions introduced by the colonial masters, the Gagbo Menu toyon of Ajido called on government to take the lead in reawakening cultural consciousness.

He said: “I was in Brazil three years ago and what I saw marvelled me; I saw Brazilians engage in  Osun worship, Ogun and Ifa worship.

“I can’t believe that what we have rejected as evil in Yoruba land has been embraced elsewhere and they are putting on our outfits and dancing the way we do, white men and women.

“If these people can see the good in our heritage, why can’t we retrace our steps and go back to the good in them? ” Chief Kuniji quipped.

The Gagbo Menu Toyon of Ajido Kingdom, who marked his coronation anniversary in Nigeria and Benin Republic, emphasised that he was moved by the way European countries embraced African heritage.

At Cotonou , the capital city of Benin Republic,  Kunnuji was welcomed by Mr Isidore Gnonlonfoun, a Minister in  Republic of Benin, who is also a member of the country’s parliament.

Gnonlonfoun organised a short prayer for Sonayon  Kunnuji, whom  he described as a brother and lover of the country. A mammoth crowd gathered to welcome Kunnuji at the Wasoagbe area of Cotonou, where the descendants of Gagbo live.

There was a  colourful cultural display as traditional Zangbeto and other masquerades danced with traditional dancers and drummers to entertain and welcome Chief Kunnuji back home after many years abroad. Chief Kunnuji was led by elders of Gagbo to four different powerful shrines of their descendants in Cotonou.

Speaking to journalists shortly after observing different rites at Gagbo compound in Cotonou, Kunnuji said his descendants originated from Gagbo in Republic of Benin. He said: “My forefathers originated from Benin Republic. During the war, they migrated through the Atlantic Ocean all the way to Ajido communty in Badagry, Lagos.

“When they got to Ajido, they stopped, crossed the Atlantic ocean and decided to stay there. So, according to history , my great grand father was the first Baale of Ajido Kingdom.

“So Gagbo family came from here. In Benin Republic, we have Gagbo and Zanga family and I belong to both side. Gagbo is my father’s side while Zanga is my mother’s side. So, I am traditionally qualified to be Zanga or Gagbo.”

Kunnuji disclosed that he had to observe all the traditional rites at the shrines as they are normally done. He later moved with his entourage to Zanga area of Cotonou to greet his family in his mother’s side, where he was received by his kinsmen with merry and fun.

Chief Kunnuji was welcomed back to Ajido kingdom by the youths with fanfare, where he also visited all Gagbo shrines. The event was rounded off with pomp and celebration as guests were entertained. 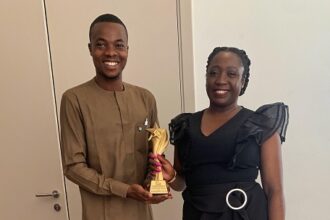 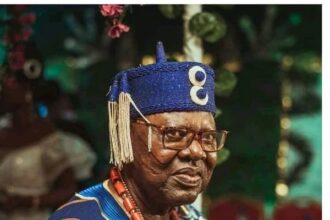 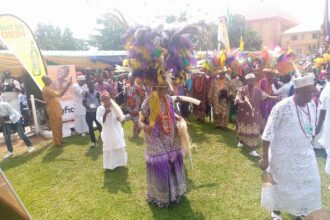