It is now 16 years today since the Afrobeat King, Olufela Olusegun Oludotun Ransome-Kuti better known as Fela Anikulapo Kuti passed on. He died August 2, 1997. He was 58.  His late father, Reverend Oludotun Ransome Kuti was a protestant minister and a school principal. He was the first President of the Nigerian Union of Teachers, his mother Fumilayo was an activist noted for anti-colonial movement, and the first Nigerian woman to drive a car.

His late brother, Dr. Olikoye Ransome Kuti announced at a press conference in 1997 that his beloved brother died of Acquired Immune Deficiency Syndrome (AIDS), the first family to put a face to the ailment, thus making Fela the first known face of AIDS.

Born in October 15, 1938 in Abeokuta, Fela married Remilekun Taylor, through whom he had three children, Femi, Yeni and Sola. Fela had Seun through one of the 27 wives he married on a single day.

In 1958, Fela Kuti moved to London where he began studying music. It was while there that he formed the musical group called Koola Lobitos, which was later renamed Nigeria 70, then Afrika 70, and finally Egypt 80. The group is known for playing Afrobeat music, a fusion of American jazz, pop and funk blended with West African highlife and traditional Yoruba music.

Fela had dozens of music to his credit through Polygram records. Among which is Beasts of no Nation, ITT, Zombie, Confusion and Unknown Soldier. His language was Pidgin English, so that he could reach target with his social commentaries and messages aimed an emancipating the Nigerian people from bad government and military dictatorship.

His messages were more or less paved with thorns for the military. His release of Zombie in 1977 infuriated the military who invaded his Kalakuta Republic, Mushin and threw his elderly mother, Funmilayo from a story building.  She died after sustaining terrible injuries. The republic was set alight. Fela was beaten severely but as a dogged fighter, he delivered his mother’s coffin to then Military Head of State, Gen. Olusegun Obasanjo  in Dodan Barracks and followed it up with two songs “Coffin for Head of State” and “Unknown Soldier”, when the military authority tagged the assailants as unknown soldiers.

There is probably no Nigerian activist that suffered like Fela who was hounded into prison on several occasions. He had his ugly side. He was chain smoker of Indian hemp, (Igbo) and makes no pretence with his love for sex and women. He is also a traditional African worshipper, noted for the shrine, which bore photographs of his later mother and other items at then Pepple Street.

Fela’s remains was brought to Tafawa Balewa Square at 4 AM, where he laid in state for the rest of the day.  It was followed by a procession that brought Lagos to a halt. The procession walked all the way to Afrika Shrine at Pepple street, now computer village, arrived at about 1AM in the morning and was thereafter moved to Gbemisola were he was buried. Today the Shrine has relocated to  a more befitting  location at the Central Business District, Alausa, Ikeja. Though dead, Fela lives in the likes of his sons, Femi, Seun, Dede Mabiaku and others he created and left with his brand of music. Gbemisola now wears a new look, having been converted into a museum with photographs and personal effects of the late musician. 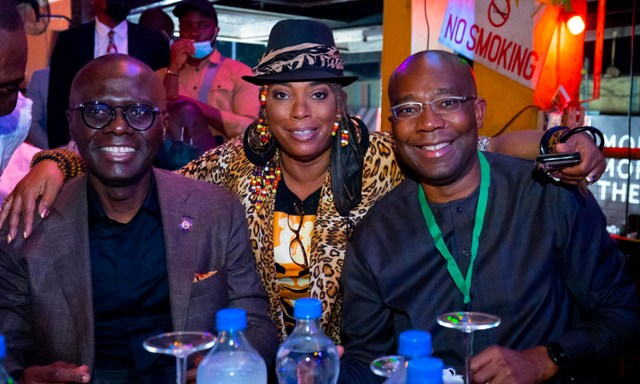