Top rated Nollywood actress, Omotola Jelade-Ekeinde is bitter that the Senate has endorsed the Child Marriage Bill, giving free reign for children to be given out in marriage irrespective of  age.

The bill had thrown the Senate into commotion with  Senator Ahmed Yerima who is famous for marrying a 14 year old Egyptian lady arguing that in Islam, a child is no longer regarded as such once she is given out in marriage. Yerima married the Egyptian girl while he was Governor of Zamfara State and allegedly paid $100,000 as bride price.

Ekeinde who spoke in Yenegoa, Bayelsa while being conferred with Silverbird Personality award during the Most Beautiful Girl in Nigeria(NBGN) award, said she is shocked that the Senate could not get busy with passing laws that would ensure that every child is compulsorily enrolled in school, wondering whether the Senate is out to protect the Nigerian child or denigrate it.

“It scares and totally shocks me that the Senate in Nigeria (the most populous black nation in the world and Giant of Africa) would not be passing in a law ensuring that every child should compulsorily be enrolled in school. A very alarming number of children today are on the streets Hawking or have been abused, Raped or are married to men/women who should be protecting them. Who protects the children of Nigeria?

“Would we wait for another Milala before we act? Should we now remove the parental caution on movies that say ” Not for persons below 18″. This is a call for justice and Equity for children especially the Nigerian Girl child, who has the right to quality education, a childhood and the decision of whom and when to marry. My Name is Omotola Jalade Ekeinde and I say No to paedophilia and No to the senate Bill endorsing Child marriage in Nigeria”, he said adding that she was not given out in marriage before the age of 18. 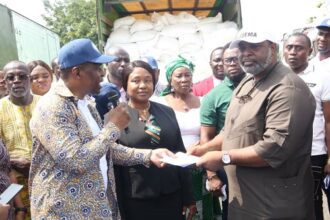 NDDC intervenes in Bayelsa State with palliatives for flood victims