Why Peter Obi, LP is unstoppable 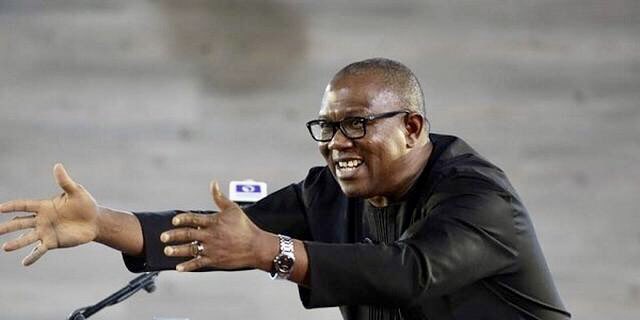 “In one of his interview, Peter Obi dismissed this threat when he said that what the major parties referred to as structure is nothing but the PEOPLE, adding that when he became governor of Anambra State using  the platform of the All Progressive Grand Alliance(APGA),  there was no APGA councilor, no APGA lawmaker and no APGA chairman yet he won the election,  assuring that a repeat of the feat is possible with LP“

IKEJA, Lagos, Nigeria – What an irony! The man Peter Obi, who was forced to exit the Peoples Democratic Party, PDP prior to the presidential primaries because he would not lavish his hard earned money to buy delegates in his selfless quest to rescue Nigeria is today the chief cornerstone and indeed the man to beat in the 2023 general election.

Nigeria, a beautiful bride, blessed with everything that is required to make it the Mecca of the world is lying prostrate as a result of bad leadership. The PDP took its turn for 16 years and ended up with a scorecard of corruption and insecurity  but delivered what seems to be a manageable economy, putting Nigeria ahead of South Africa, with the US Dollars below N200.

The All Progressive Congress(APC) took over in 2011 and is delivering uncompleted projects of the previous government  but it has made Nigeria the poverty capital of the world following policies which are clearly detrimental to the Nigerian economy. Today,  the US Dollar is N613 after soaring to N700 to a Dollar. Inflation is 17.7 percent, with cost of goods spiraling beyond the reach of the common man.  Diesel now sells for over N700 per liter, aviation fuel almost at the same rate, while petrol, sells at N170 at the minimum.

The four refineries are not working even with several billions invested in turnaround maintenance; power supply is endemically epileptic; unemployment so high and unparalleled in human history coupled with unprecedented insecurity in country – The average Nigerian cannot fly, even those who choose to are not safe in the airports – they are not safe in the train, neither are they  safe commuting by road. The terrorists, now beautifully adorned as bandits by those in power have held Nigeria by the jugular with President Muhammadu Buhari of the ruling APC, showing signs of helplessness in all ramification as the nation drifts towards anarchy.

To make things worse the candidates, the two major political parties have thrown up to contend with the monster which has reared its head in Nigeria are two very elderly people. Alhaji Atiku Abubakar(75) and Senator Bola Ahmed Tinubu(70). They all had issues when it comes to integrity as a result of their antecedents in and outside government. Tinubu on the other hands is frail and has been in and out of London for medical tourism.

While both were basking in the euphoria of emerging from the primaries as Presidential candidates, Peter Obi, who is   61 years and very fit, sought his mission in the Labour Party, (LP) which has since become an anthem in the mouth of the masses.  His choice of LP must have been a product of deep thinking since the workers have for years borne the brunt of government’s poor thinking and poor execution.

For those who cared to know. The former Governor of Edo State, Comrade Adams Oshiomhole, who was president of Nigeria Labour Congress, NLC until he became governor chickened out from flying the ticket of the NLC party,  the LP that brought him into prominence perhaps for lack fate in what he built,  but Olusegun Mimiko rode on his popularity using the ticket of the Labour Party, LP to become governor of Ondo State. So, the LP is not new to winning elections, it is just that many were frightened by physical structure, which has been brandished by the PDP and APC and used as tool to intimidate others into submission.

In one of his interview, Peter Obi dismissed this threat when he said that what the major parties referred to as structure is nothing but the PEOPLE,  adding that when he became governor of Anambra State using  the platform of the All Progressive Grand Alliance(APGA),  there was no APGA councilor, no APGA lawmaker and no APGA chairman yet he won the election,  assuring that a repeat of the feat is possible with LP.

But the emergence of Peter Obi brought life into LP, more like Elisha breathed  life into bones at Ezekiel 37: 1-14.  Peter Obi gradually walked himself into the minds of Nigerians with his message of hope, among which is “there is nothing anymore to share” and that he will move Nigeria from “a consuming nation into a productive one”.

He has been speaking about needless waste in government and the need to cut down excesses of governance as he did in Anambra when he held sway as governor.  Besides, he is humble, charismatic and very winsome. A true nationalist, Peter Obi relates with the poor masses and has become the symbol of what Nigerians want against policies of the political elites who have held Nigeria down for years. No wonder, wherever he goes, Nigerians want to meet with him and take ‘selfies’ with the man who has become their obsession for good governance.

His message of hope has resonated and going far into every nooks and crannies like wild fire,  as the symbol of hope among the masses. An economists and a thorough breed technocrat, he is seen as the man with the best PROFILE and total grasp of what it takes to take Nigeria out of the woods.

This is happening even when he has nothing to share,  apart from offering himself since has not stolen from government and has no intention to steal if he becomes president. In addition,  his message of shared prosperity – making things better for Nigerian instead of enriching few individuals to the detriment of the state as could be seen in Lagos and almost every other states appears to be a major attraction.

His message is spreading very fast to the north, east, west and south, even into the homes of major stakeholders in  the major political parties, acknowledged by Edo State Governor, Mr. Gaius Obaseki, who made it very clear that the masses are already seeking alternative having become disoriented with both the PDP and APC and he called for the need for the PDP to rebrand and make the party attractive otherwise 2023 spells doom for the two parties.

Peter Obi has become a phenomenon, and as the movement spreads far and wide, groups are beginning to own his personality with the emergence of ‘OBIDIENT’  even in every home, as Obaseki acknowledge in his well televised speech.  OBIDIENT is promoted every day on the social media with the tag #PeterObi4President; #takebacknigeria everyday  on the internet and trending almost every minute, two times more than any other candidate. He has also won all the online polls, beating Tinubu and Atiku to the second and third positions respectively.

Peter Obi trends despite the fact that he has not given any money to anybody(social media influencers and those right there in the streets)  yet his billboard are all over, his T-shirts are all over, with many who are driving his campaign unknown to him.

The youths are using their skills producing skits, and sponsoring commercials on the social media with their personal money.  Musicians are organizing OBIDIENT concert to drum up support for his candidature and collection of PVC, which  has been interpreted by some youths as Peters Votes Counts. Besides, they are rejecting   huge monetary overtures by the major political parties to ditch Peter Obi and come over and drum support for their candidates. You now see how far the youths are ready to go in their quest to make Peter Obi, the man to succeed President Muhammadu Buhari.

An artist in far away Jos is busy spreading the Obi fever in his own little way by painting his portrait on his wall.  The message is spreading, with the youths taking their destiny into their hands by campaigning openly in the streets of Lagos, Benin City, Calabar, Port Harcourt, Kaduna, Kano, Bauchi, Borno, Sokoto and everywhere. Besides, doing it openly on the street without the egging by anybody, they are organizing themselves and preaching  the gospel of Peter Obi from house to house. Some are even  spelling Peter Obi in haircut across their head. 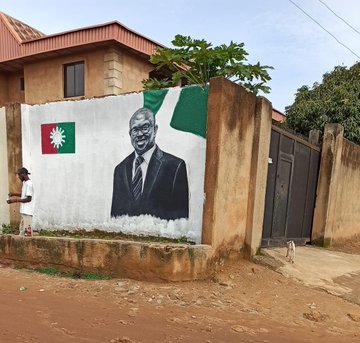 “Jehovah’s Witness activated”, one of them said, taking a cue from the skill of the Jehovah’s Witnesses in house to house witnessing and they seemed very, very determined.  Who then can stop the masses, when they rise within the confines of the constitution in defence of their rights to elect and be elected into office?

Even President Muhammadu Buhari who rose on popular support did not get this amount of selfless patronage from the Nigerian masses. Peter Obi remains the character behind the huge drive for PVC among the youths.

Right there in the street and on the social media, there is an obsession for him, the  best man, they believe can occupy the number one seat.  They are hopeful because  history is replete with people who have won election based on popularity and political party that were not dominant at a time. The President of Liberia, Mr. George Weah for instance won his election through the Congress for Democratic Change formed by his supporters, after retiring from active football.

Besides, the population of the youths, not to talk of Nigeria far outweighs the population of APC and PDP put together. Yobe State Governor, Mala  Buni said there are 41 million registered members of APC in Nigeria by March 2022, while the PDP is yet to  state total registered members but targeted 100 million members in their own voter registration exercise, whereas the Independent National Electoral Commission, INEC says there are 84 million registered voters in Nigeria by February , 2022.  But with the current surge, total number of registered voters should exceed the 100 million mark before the election, putting the masses in good stead to take Nigeria back from the two major political parties.

As for testimony, nothing could be better that this from former President of Nigeria, Chief Olusegun Obasanjo;   “He is not a saint but among politicians in Nigeria today, Peter Obi is a bundle of integrity.”

However, the advise is for the OBidient (Peter Obi followers)  to  take away the ethnic sentiment from the campaign as Peter Obi,  remains a nationalist –  he is just from the South East, which justifiably has the sole right to lay claim to the presidency, but the region has been deprived for decades. If Peter Obi wins, the South East would have realized their quest to rule Nigeria for the first time.

51 DAYS OF TEARS: AMBODE WHERE ARE THE 6 PUPILS OF LAGOS MODEL COLLEGE IGBONLA

BRF at 58 : A return to the mind’s infrastructure