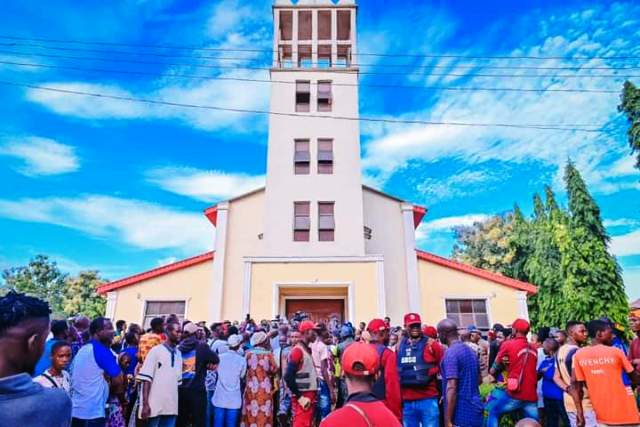 “It is clear that modern-day technologies have proven that the hideouts of the bandits and terrorists in the northern parts of the country cannot be permanent safe havens for their criminal activities, if the government is really ready to deploy such technologies. The claim of trying to avoid collateral damage can only make sense for so long as the government is not ready to act”

LAGOS, Nigeria – The ancient but quiet city of Owo is not often in the news. It is a prosperous but peaceful city located in the southwestern part of Nigeria.

Save for occasional features in politics and boasting of illustrious sons like Chief Adekunle Ajasin, a nationalist and first civilian governor of Ondo State, Oba Olateru Olagbegi, a most prominent Yoruba Oba known to have fathered more than a hundred prosperous and illustrious children and who contributed immensely to the struggle for independence in Nigeria, and Arakunrin Oluwarotimi Akeredolu, SAN, the current governor of Ondo State and many others, the city of Owo is not a usual haven for sad stories.

This narrative changed on the 5th day of June, 2022. It was a Sunday and the earliest hours did not forecast bloodshed and gnashing of teeth as residents and visitors to the city chose their usual lifestyle of resting and performing their religious activities in churches and other houses dedicated to God.

The usual serenity, flamboyant dressing to church and quiet movement of humans in various vehicles and on foot, according to the status of the personality involved, to church, only promised of another day of early-morning worship to be followed by the usual fun and drinking activities in pubs and other places of enjoyment.

It was at the peak of religious activities that gloom descended on Owo city. St. Francis Catholic Church, Owaluwa, Owo, was the choice. Merchants of death and unfortunate sons of Satan attacked. With grenades and bullets, no fewer than 50 persons were allegedly killed and injured. The heartless assailants did not spare children in this murderous misadventure. It was a well-planned and carefully executed macabre act.

A promising day went wild in lamentations and sorrowful wailing. Families counted multiple losses to one single attack. Orphans have been made. Widows and widowers have increased. Parents are counting their losses to the cold hands of death they never foresaw. The killers were in terrorist garb as they took no hostage or demanded ransom neither did they take any loot. Their message was clear. It was a message of multiple deaths to people they never knew. It was a message of bloodshed to people who never offended them. It is another dastardly decision to test the resolve of the South West in championing regional security and state police. It is a challenge to the effectiveness of Amotekun, the South West regional security architecture put in place to nip crimes in the bud and guarantee safety of life and property.

Consistent reports have, over time, been indicating that the forests in Yorubaland are already occupied by terrorists who believe that all lands belong to them and must be taken over as a matter of time. A quite disturbing aspect of it is the fact that June 5 is the anniversary of the terrorist attack on Igangan town, a quiet, agrarian town in Oyo State that had never been heard by multitudes until that unfortunate incident that killed and maimed many.

Persons allegedly identified as Fulani herdsmen entered the town and rendered many into the cold embrace of sorrow and pain. Till the moment, the little town has not recovered. There are questions to be asked. Could this be a calculated message of confirmation that the South West is under siege as claimed by many analysts? This is not a moment for adulatory self-congratulation for being politically correct or sounding nationalistic in order to curry favour from those who believe that it is Nigeria at all costs.

It is a moment of critical examination of events threatening our individual and collective existence as humans. It is a moment to look inwards and be careful of what we condone. While we all deplore crimes and call for an end to what is happening in the northern part of the country where terrorism has become a permanent feature of living, it is certain that the other parts of the country had been safer until recently.

A few weeks ago, a 36-year-old sound engineer, David Imoh, was killed in Lekki, Lagos State, by persons suspected to be okada riders and of a particular ethnic origin. This has led to the ban on okada riders as transporters in major parts of Lagos State. The influx of many of these people into Lagos calls for concern.

The question whether they are Nigerians really calls for consideration as many of them do not understand any Nigerian language, speak sparse pidgin English and communicate more in French. This only confirms that they are non-Nigerians. The system has become more permissive as all manner of miscreants enter Nigeria, particularly from the northern parts of the country, where it is confirmed that no fewer than 108 footpaths enter Nigeria without any border or immigration policing.

The recent claims by some northern governors that Fulani people are borderless and are free to roam the earth has not been helpful. The devastations and senseless attacks we witness on locals whenever cows are involved have not been a thing of justification known to any civilized people in any part of the world. It is unfortunate that rather than the government intensifying efforts to curb all these atrocities, it rather allows the nation to sink further into despair and the people subjected to all forms of deprivations of lives and properties.

It is the case that, where lives are involved, reasonable leaders would gird their loins and stand for human protection. The case is not so in Nigeria, as the people in power seem to have been completely ensconced in irresponsible forms of governance. Recent efforts by the Lagos State government to rid the streets of Lagos of these miscreants, whose only places of residence are the seats of their okada, must rather be commended. A sane comment will not put the burden on a government to provide jobs and accommodation for anyone who is reckless enough to travel on the open vessels of a trailer from the Sahara without any particular mission for coming to Lagos. This is a state government whose territories are not subject to restrictions from ingress and egress in the name of being part of a country where the Federal Government opens the borders to anyone coming in from the north.

What we have seen is a situation where youths of no particular education or skill troop into southern states in trailers used for transporting cows without any consideration for where they will live or what they will do to earn a living. They have rather turned themselves into the burden of working individuals as they kill, rob and rape. No sane society operates like that and expects to make progress. It is certain that the way Nigeria is going, Rwanda of the 1990s is going to be child’s play. Lives are no longer safe on the roads. The recent attacks on trains from Kaduna to Abuja and the airport in Kaduna have confirmed that no place is safe in the hands of these marauders. No tangible efforts are being made to rescue those in captivity and daily we watch videos of horror to which these hapless victims are being subjected by their captors.

The government’s laid-back attitude is disappointing and terribly disconcerting. One wonders how a people in power would feel comfortable to continue occupying positions of leadership in the face of these egregious failures. No Nigerian voted for this government only for it to mount the saddle and be pretending to be riding forward when it is clear that the nation is sinking into the nadir.

It is clear that modern-day technologies have proven that the hideouts of the bandits and terrorists in the northern parts of the country cannot be permanent safe havens for their criminal activities, if the government is really ready to deploy such technologies. The claim of trying to avoid collateral damage can only make sense for so long as the government is not ready to act.

The statement credited to the late Head of State, General Sani Abacha, is apparently correct that where terrorism lasts for more than a few days, the government has a hand in it. It is time we all woke up from our slumber.

Our lamentations that the North be secured for all lives to prosper as it used to be; our calls for return of peace and prosperity to the northern parts of the country have been spurned by the system. To recover the North may take another 50 years, if the current set of leaders are not replaced with people who are ready to actually lead and bring back our peace. This is the time for hashtag #bringbackourpeace campaign to trend. The governors in the South West should brace up to strengthen security architecture in all ways.

No document, by whatever name called, is powerful enough to make lives and properties a thing of play by a rudderless set of leaders. Our governors must rise up to the occasion. Enough is enough. Special intelligence services ought to be engaged to monitor our environs. We must deploy drones to scan our forests and locate any suspicious gathering of unauthorized or unlicensed occupiers. Citizens must cooperate as informants to rid our communities of criminal elements from whatever ethnic background. Crime knows no ethnic origin save when carried out by people for ethnic reasons. We must make a statement that Igangan must not repeat itself. We must let the world know that the Owo massacre shall be the last to be witnessed by anyone. A society that is incapable of guaranteeing lives and properties is not capable of self-government.

The clause in our national anthem that “the labour of our heroes past, shall not be in vain” has been rendered meaningless by visionless governance over the years. We must take back our peace. To those who lost lives in Owo; to those whose dreams were cut short in Igangan; to those who live in captivity in Kaduna forests; to all those whose future are threatened in different parts of the country by terrorism and failure of governance, I say, we must take back our peace. This is my pain and admonition  while deferring the discussion on the political party’s primaries till next week.