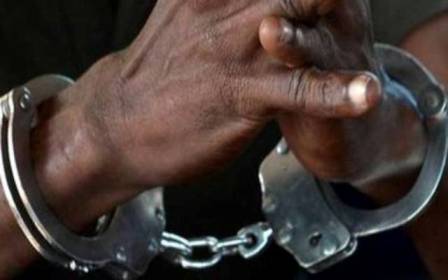 IKEJA, Nigeria – A Special Offences Court sitting in Ikeja, Lagos has convicted and sentenced  Adekunle Abiodun Aderibigbe, a  syndicate with specialty  in harvesting data of US citizens  to two years imprisonment.

Delivering his judgment, Justice Oluwatoyin Taiwo said the Economic and Financial Crimes Commission, EFCC succeeded in proving the convict as a member of a syndicate notorious for stealing  fraudulent tax returns from the Internal Revenue Service, IRS of the United States of America.

Justice Oluwatoyin Taiwo held that the money traced to the convict are proceeds of crime as he has failed to prove his source of money sufficiently.

The EFCC had arraigned the convict, Aderibigbe following a petition from the Federal Bureau of Investigation, FBI of the United States.

FBI had reported the convict as a member of a syndicate operating in the US and specialised in the stealing of US citizens’ data to obtain fraudulent tax returns from the Internal Revenue Service, IRS.

The FBI in the July 10, 2020 report further alleged that the defendant along with other members of the syndicate perpetrated the fraud through the help of one Curtis Betley serving jail-term in the US, in stealing the identities of American citizens and using same to file over 255 fraudulent tax fund returns with the IRS making over $1.6million.

Following up on the report from the FBI, the EFCC after painstaking investigation effected the arrest of Aderibigbe, and after investigations, filed an amended five-count charge against him on the 5th of August 2020.

He was charged with offences bordering on retention of proceeds of criminal conduct contrary to Section 17 of the Economic and Financial Crimes Commission Establishment Act 2004, and impersonation, contrary to Section 378 of the Criminal Law of Lagos State 2011.

He pleaded not guilty to all the count charges levelled against him. Subsequently the prosecution, led by counsel for the EFCC, Ahmed Yerima, opened its case on the 24th day of August 2020, called three witnesses, tendering several documentary evidence to proof the allegation against him.

Thereafter the defence opened its case on the 3rd of October 2021, with the defendant taking to the dock to defend himself as a sole witness.

Delivering judgment, Justice Taiwo found him guilty as charged for the offence of retention of proceeds of criminal conduct and sentenced to two years.

The court ordered him to restitute the sum of eight million naira, while discharging and acquitting him for the offence of impersonation. Following the allocutus of the defence counsel, Lanre Oloidi, the court granted him an option of fine of two million naira.

One of the counts reads: “Adekunle Abiodun Aderibigbe, sometime between the year 2014 and 2016 in Lagos within the Ikeja Judicial Division of this Honourable Court retained in your control the aggregate sum of N22,000,000 only in your GTB bank account being proceeds of criminal conduct on behalf of Olumiyiwa Olawoye, Adekunle Adegunroye, Keke Animahun (all at large).”

Another count reads: “Adekunle Abiodun Aderibigbe, sometime between 2013 and 2016 in Lagos within the Ikeja Judicial Division of this Honourable Court with intent to defraud, opened an email account abbeya333@yahoo.com linked to your GSM number 0803366089 and 08059985552 and hid your identity by falsely representing yourself to unsuspecting members of the public as tax collector in the United States of America, which pretence you knew was false.”

Trump concedes to Speaker Pelosi, looks forward to state of the union address in the future