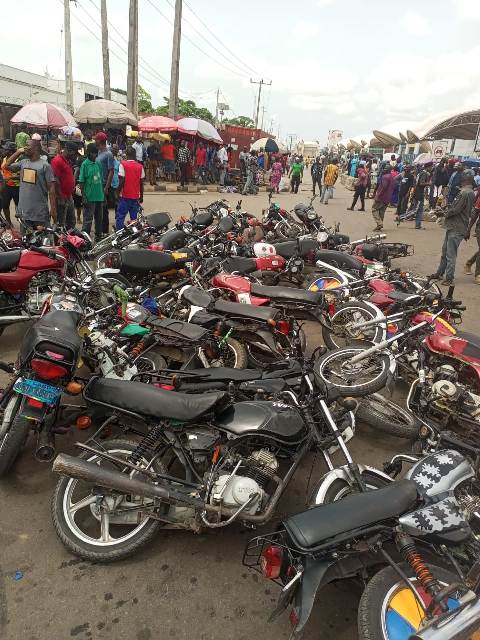 LAGOS, Nigeria – The Lagos State Government has intensified mop up operation in Lagos to rid the state of activities of aliens who are masquerading as commercial bike operators, killing and maiming residents of Lagos State.

The Lagos State Government  intensified the operation following the murder of a Sound Engineer,  Mr. David Omahi, who was murdered  with clubs by a mob of okada riders in Lekki – an area where operation of motorbikes is clearly restricted-  for misunderstanding regarding payment of fare. Watch  video HERE.

Led by the Lagos State Taskforce, the statement said the mop up exercise to rid Lekki axis and the entire State of unscrupulous Okada operators  will continue.

Chairman of  Lagos State Taskforce, CSP Shola Jejeloye stormed the axis in a sting operation at mid day and seized 115 bikes for flouting the State Traffic laws of operating on restricted routes and plying the State’s Highways.

Jejeloye said that the agency will make do of its promise by ensuring that the illegal business carried by these operators will be frustrated till they  obey laid down laws of the State.

“This operation will be a continuous one not just in Lekki but in every other part of the State, and we will make sure that their activities are truncated till they abide by the rules. They will never be above the law no matter how large their numbers are” He stated.

The Chairman promised to raid black spots and hideout of Okada operators within the axis and other parts of the State within the coming weeks in order to make their illegal activities unproductive  and make the state harsh for any operator who has turned deaf ears to the warnings of the State Government.