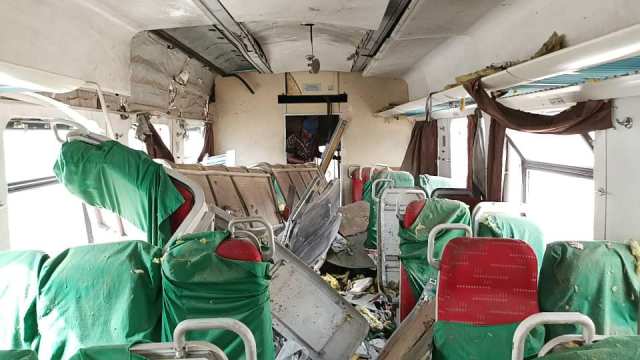 KADUNA, Nigeria – Anas  Iro Danmusa, one of the passengers who boarded the ill-fated Kaduna bound train from Abuja that was attacked by  terrorists who ripped the locomotive apart using explosive reveal details of how the invasion and brutal killings occurred in the deadly train.

He began by showing appreciation to Facebook family who shared his alert until it got to the military authority, whom he said responded in an unprecedented manner, the type you see in movies. He also singled out Samuel Aruwan, a commissioner in Governor El-Rufai’s cabinet for acting on his message, unlike the usual government response to issues.

“It was amazing how a large number of facebookers swiftly acted upon our posts by sharing as suggested which led to the message reaching the appropriate people and authorities within just a short time.

“It also led to the message pass across all social media platforms. If not for your efforts, only God knows what would have happened with us. As you were there for us, may God also come to the aid of each and everyone of you in your time of need. We cannot thank you enough!

“It all started from our coach on the train where I wanted to use my phone to seek for help but other passengers were highly against it because phone brightness meant mean more shooting in that direction.

“That was how I first contacted my vibrant special bro Al-Amin Sulaiman that has always been there for me. Before I could do that, my head and hands together with the phone were covered with the green train seat cover to avoid drawing attention.

“In just few minutes, I was already on phone with Samuel Aruwan…you should know who that is because he is a hero. That was how he requested I share our location on whatsapp and to the glory of God, it went through using airtel despite the poor network coverage.

“He then forwarded it to the Army Officers and that was how we were tracked on time. Note that all the terrible things were happening at the same time but I was making efforts to make contact in order for us to get help. My brother was able to engage me with the DSS, one Brigadier General Adebayo and Hon. Commissioner Samuel Aruwan. The soldiers informed me that Air Force could not make it due to the weather but help was on the way and they fulfilled their promise.

“I could say their response and arrival was the fastest anybody could achieve by road. I can never forget what the HQ Nigerian Army did for us. They responded swiftly, rescued us, comforted us, gave the badly injured priority and made sure they were dispatched to 44 Nigerian Army Reference Hospital and finally took the rest of us to the same destination with mostly their buses.

“I pray you keep growing stronger and winning your battles against the enemies of the nation. I also pray that God gives the FG the wisdom and capacity to keep supporting you in the best way that will enable you discharge your responsibilities.

“We are very proud of you. Not forgetting the DSS and the role they also played. We are so grateful. May God give you the wisdom to keep tracking the bad elements in our society and making it better for all of us”, he said, adding that  what this terrible situation reminds him is having competent leadership.

“If Mr Aruwan was out of the equation, the story would have been different no doubt. His quick response to the situation and in engaging the army makes him a competent and reliable public servant. He is an example of what we are lacking in leadership in Nigeria. I must thank the Executive Governor too, His Excellency, Nasir El-Rufai for putting in place competent people that can actually get things done without excuses or pointing fingers.

“I want to use this opportunity to draw the attention of the Nigerian Railway Corporation NRC to how grossly they take record of passengers. You won’t know when keeping record professionally is important until when the need for the record emerges even when you don’t use it to make future plans and policies.

“Attached herewith is the list of passenger manifest as released by NRC. Let me start by myself as an example. I bought my ticket at the Kubwa train station. The guy that sold me ticket collected my information before printing and giving me my ticket. From the passenger manifest, I observed that 08087545321 was the number against my name which I don’t recognize.

“I think it was randomly assigned to me which is illegal. Check serial no. 268 and 269 you’ll see 33333333333 for both as phone numbers. Check 223 and 224 you’ll see 6495999999 and 9292999999 as phone numbers respectively. Are those numbers phone numbers? Some of the passengers I spoke with were also assigned wrong numbers especially those that didn’t buy ticket online. The NRC management needs to do better by doing the job given to them satisfactorily by showing high level of professionalism. Lack of good record keeping has its own consequences.

“On the train, we have seen many things. We have seen dots but we couldn’t connect anything until after the attack when we were miraculously rescued. The NRC and the government in general have alot to do to be able to succeed in rendering trouble-free train services apart from installing explosive detectors and other gadgets.

“Among other things, what shocked me the most was to see about 3 doors left open on a moving train. I have never seen or heard that and I don’t know how it happened. It was one elderly man that felt it was weird and had to close them because it was dangerous. Two unverified claims that I want to share, which the NRC could use in improving the safety of passengers are: many passengers claimed they saw weird things and these people are not the type that you’ll say it was the trauma of the incidence that was affecting them or they did not know what they were doing.

“Some passengers said they saw a strange man that was not in uniform with a walkie talkie phone but they felt it wasn’t their business. Note that the TERRORISTS that attacked the train were using walkie talkie phone to communicate with the person co-ordinating things from outside. Hope you get the point? Again, a lady saw someone that was part of a gang that kidnapped her sometime ago and had the intention of raising alarm at Rigasa train station if not for the unfortunate event that happened.

“These two claims were shared with us but I believe even if they are not true, the NRC as part of the new strict measures that will be in place, could use this information so as to avoid future occurrence of such.

“Finally, my heart goes out to those that lost their lives and their families, may their souls rest in peace. I pray that God makes it easy for those kidnapped and their families too, may He enable them to make it back home safely and in good health.

“We that were traumatised, God knows best the right punishment for the evil, may those callous people never know peace anywhere they are and may any unrepentant TERRORIST die a miserable death.

“ If our leaders keep being indifferent about the difficulty the citizenry face, I pray God replaces them with those that will care for us and make the country a much better place for us all. Stay blessed!!!”, he shared.

All I know about Baba Ijesha by Pastor Jerosi