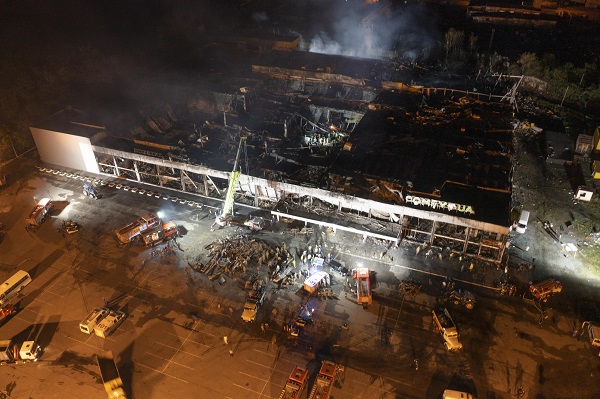 Amnesty released the reports following massive civilian casualties in ongoing war in Ukraine. Authority in Ukraine, led by President Volodymyr  Zelensky has said repeated that Russia is targeting civilian residents in the ongoing war but that such violations in no way justify Russia’s indiscriminate attacks, which have killed and injured countless civilians.

“Ukrainian forces have put civilians in harm’s way by establishing bases and operating weapons systems in populated residential areas, including in schools and hospitals, as they repelled the Russian invasion that began in February, Amnesty International said on Thursday, adding that such tactics violate international humanitarian law and endanger civilians, as they turn civilian objects into military targets.

“We have documented a pattern of Ukrainian forces putting civilians at risk and violating the laws of war when they operate in populated areas,” said Agnès Callamard, Amnesty International’s Secretary General.

“Being in a defensive position does not exempt the Ukrainian military from respecting international humanitarian law”,  Amnesty said.

According to the organistion, not every Russian attack documented by Amnesty International followed this pattern, however.

“In certain other locations in which Amnesty International concluded that Russia had committed war crimes, including in some areas of the city of Kharkiv, the organization did not find evidence of Ukrainian forces located in the civilian areas unlawfully targeted by the Russian military”, AI said.

“Throughout these investigations, researchers found evidence of Ukrainian forces launching strikes from within populated residential areas as well as basing themselves in civilian buildings in 19 towns and villages in the regions. The organization’s Crisis Evidence Lab has analyzed satellite imagery to further corroborate some of these incidents.

“Most residential areas where soldiers located themselves were kilometres away from front lines. Viable alternatives were available that would not endanger civilians – such as military bases or densely wooded areas nearby, or other structures further away from residential areas.

“In the cases it documented, Amnesty International is not aware that the Ukrainian military who located themselves in civilian structures in residential areas asked or assisted civilians to evacuate nearby buildings – a failure to take all feasible precautions to protect civilians”, AI said.

According to the report, survivors and witnesses of Russian strikes in the Donbas, Kharkiv and Mykolaiv regions told Amnesty International researchers that the Ukrainian military had been operating near their homes around the time of the strikes, exposing the areas to retaliatory fire from Russian forces.

“Amnesty International researchers witnessed such conduct in numerous locations”, it said, adding that international humanitarian law requires all parties to a conflict to avoid locating, to the maximum extent feasible, military objectives within or near densely populated areas. Other obligations to protect civilians from the effects of attacks include removing civilians from the vicinity of military objectives and giving effective warning of attacks that may affect the civilian population.

“The mother of a 50-year-old man killed in a rocket attack on 10 June in a village south of Mykolaiv told Amnesty International: “The military were staying in a house next to our home and my son often took food to the soldiers. I begged him several times to stay away from there because I was afraid for his safety. That afternoon, when the strike happened, my son was in the courtyard of our home and I was in the house. He was killed on the spot. His body was ripped to shreds. Our home was partially destroyed. Amnesty International researchers found military equipment and uniforms at the house next door”, the report said.

Mykola, who lives in a tower block in a neighbourhood of Lysychansk (Donbas) that was repeatedly struck by Russian attacks which killed at least one older man, told Amnesty International: “I don’t understand why our military is firing from the cities and not from the field.” Another resident, a 50-year-old man, said: “There is definitely military activity in the neighbourhood. When there is outgoing fire, we hear incoming fire afterwards.”

Amnesty International researchers witnessed soldiers using a residential building some 20 metres from the entrance of the underground shelter used by the residents where the older man was killed.

In one town in Donbas on 6 May, Russian forces used widely banned and inherently indiscriminate cluster munitions over a neighbourhood of mostly single or two-storey homes where Ukrainian forces were operating artillery. Shrapnel damaged the walls of the house where Anna, 70, lives with her son and 95-year-old mother.

Anna said: “Shrapnel flew through the doors. I was inside. The Ukrainian artillery was near my field… The soldiers were behind the field, behind the house… I saw them coming in and out… since the war started… My mother is… paralyzed, so I couldn’t flee.”

“In early July, a farm worker was injured when Russian forces struck an agricultural warehouse in the Mykolaiv area. Hours after the strike, Amnesty International researchers witnessed the presence of Ukrainian military personnel and vehicles in the grain storage area, and witnesses confirmed that the military had been using the warehouse, located across the road from a farm where civilians are living and working.

“While Amnesty International researchers were examining damage to residential and adjacent public buildings in Kharkiv and in villages in Donbas and east of Mykolaiv, they heard outgoing fire from Ukrainian military positions nearby.

“In Bakhmut, several residents told Amnesty International that the Ukrainian military had been using a building barely 20 metres across the street from a residential high-rise building. On 18 May, a Russian missile struck the front of the building, partly destroying five apartments and damaging nearby buildings.

“Kateryna, a resident who survived the strike, said: “I didn’t understand what happened. [There were] broken windows and a lot of dust in my home… I stayed here because my mother didn’t want to leave. She has health problems.”

“Three residents told Amnesty International that before the strike, Ukrainian forces had been using a building across the street from the bombed building, and that two military trucks were parked in front of another house that was damaged when the missile hit. Amnesty International researchers found signs of military presence in and outside the building, including sandbags and black plastic sheeting covering the windows, as well as new US-made trauma first aid equipment.

“We have no say in what the military does, but we pay the price,” a resident whose home was also damaged in the strike told Amnesty International.

“Amnesty International researchers witnessed Ukrainian forces using hospitals as de facto military bases in five locations. In two towns, dozens of soldiers were resting, milling about, and eating meals in hospitals. In another town, soldiers were firing from near the hospital.

“A Russian air strike on 28 April injured two employees at a medical laboratory in a suburb of Kharkiv after Ukrainian forces had set up a base in the compound. Using hospitals for military purposes is a clear violation of international humanitarian law.

“The Ukrainian military has routinely set up bases in schools in towns and villages in Donbas and in the Mykolaiv area. Schools have been temporarily closed to students since the conflict  began, but in most cases the buildings were located close to populated civilian neighbourhoods

“At 22 out of 29 schools visited, Amnesty International researchers either found soldiers using the premises or found evidence of current or prior military activity – including the presence of military fatigues, discarded munitions, army ration packets and military vehicles.

“Russian forces struck many of the schools used by Ukrainian forces. In at least three towns, after Russian bombardment of the schools, Ukrainian soldiers moved to other schools nearby, putting the surrounding neighbourhoods at risk of similar attacks”, the AI report said.

“In a town east of Odesa, Amnesty International witnessed a broad pattern of Ukrainian soldiers using civilian areas for lodging and as staging areas, including basing armoured vehicles under trees in purely residential neighbourhoods, and using two schools located in densely populated residential areas. Russian strikes near the schools killed and injured several civilians between April and late June – including a child and an older woman killed in a rocket attack on their home on 28 June.

“In Bakhmut, Ukrainian forces were using a university building as a base when a Russian strike hit on 21 May, reportedly killing seven soldiers. The university is adjacent to a high-rise residential building which was damaged in the strike, alongside other civilian homes roughly 50 metres away. Amnesty International researchers found the remains of a military vehicle in the courtyard of the bombed university building.

International humanitarian law does not specifically ban parties to a conflict from basing themselves in schools that are not in session. However, militaries have an obligation to avoid using schools that are near houses or apartment buildings full of civilians, putting these lives at risk, unless there is a compelling military need. If they do so, they should warn civilians and, if necessary, help them evacuate. This did not appear to have happened in the cases examined by Amnesty International.

“Many of the Russian strikes that Amnesty International documented in recent months were carried out with inherently indiscriminate weapons, including internationally banned cluster munitions, or with other explosive weapons with wide area effects. Others used guided weapons with varying levels of accuracy; in some cases, the weapons were precise enough to target specific objects.

The Ukrainian military’s practice of locating military objectives within populated areas does not in any way justify indiscriminate Russian attacks. All parties to a conflict must at all times distinguish between military objectives and civilian objects and take all feasible precautions, including in choice of weapons, to minimize civilian harm. Indiscriminate attacks which kill or injure civilians or damage civilian objects are war crimes”, the report said.

AI  advised the Ukrainian government to immediately ensure that it locates its forces away from populated areas, or should evacuate civilians from areas where the military is operating.

“ Militaries should never use hospitals to engage in warfare, and should only use schools or civilian homes as a last resort when there are no viable alternatives,” said Agnès Callamard.

Security threats: men are alive to their responsibility – Sanwo-Olu

3 FEARED DEAD AS ANOTHER BOAT CAPSIZES IN LAGOS