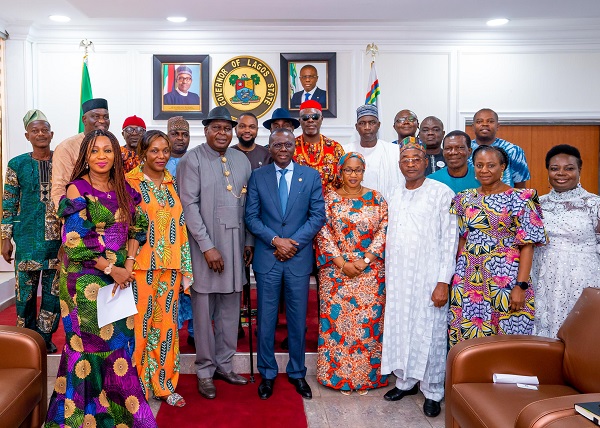 IKEJA –  Lagos State Governor, Mr. Babajide Sanwo-Olu has charged Nigerians to use the forthcoming National Festival of Arts and Culture (NAFEST) Festival as an opportunity to galvanise Nigerians and project unity in the country.

He implored Nigerians to see their diversity, ethnicity and religious tolerance as an opportunity to unite without allowing politics and other things to divide them.

Governor Sanwo-Olu made the appeal when the National Technical Committee of the National Festival of Arts and Culture led by the Director-General, National Council for Arts and Culture, Otunba Olusegun Runsewe, paid him a courtesy visit at Lagos House, Ikeja on Thursday ahead of the NAFEST Festival holding in Lagos in November.

He said: “We believe that bringing the NAFEST Festival to Lagos at this very difficult time in our country would be used as a means to galvanise the country. The NAFEST 2022 in Lagos by the grace of God will be used to heal this country. It will be used to bring together our diversity in unity.

“If sports can bring us together, arts, culture and entertainment can do better. And if we do it and package it very well before we go into the general elections in 2023, we would have used that platform to heal the country. We would have used it for people to see that we don’t have any other place to go to. We have a responsibility to fix it (Nigeria).

“We should see the NAFEST not just as a festivity but as an opportunity for us to come together, heal and project unity for our country. And ensure that if we can go into next year with all of the tribulations and fears that we have; we will suppress them, surpass them and have elections that will be free, and peaceful, and we can build a better and bigger nation that would be the envy of the world. That is what I am looking forward to.

Governor Sanwo-Olu said Lagos will continue to be a pride for all and a rallying point for Nigeria. “For us as a government, it is really about ensuring that we can use every breath that we have to better the lots of our people; that we can use the opportunity God has given us to recreate a tomorrow for citizens and we can only do that by ensuring that everything that has to do with good governance is the things we are doing.

“Lagos will open its arms to ensure a spectacular and hitch-free event and most importantly ensure that we can heal our country; we can stop the bleeding in the country and we can use it (NAFEST festival) as a platform to unite Nigeria,” he said.

Governor Sanwo-Olu also disclosed that Lagos State apart from hosting the NAFEST Festival in November, will also commission the biggest and best African museum, the JK Randle Museum for Arts and Culture and host the United Nations World Tourism Organisation and art exhibition in November.

Speaking earlier, Runsewe commended Governor Sanwo-Olu’s commitment to promoting tourism, arts and culture, noting that the decision of the government to make Entertainment and Tourism a fifth pillar in the six-pillar THEMES developmental agenda for Greater Lagos is commendable.

Runsewe, who noted that no development could take place in Nigeria without Lagos State, called Nigerians to join hands with Lagos to move the country. He said the NAFEST Festival taking place in Lagos in November will be used to unite the nation and preach love among all the citizens of the country.

Lagos’ to announce new date for launch of Whistle-Blower Initiative

Wini dedicates “My Body My Pride ‘ movie to GYB, Tinubu others