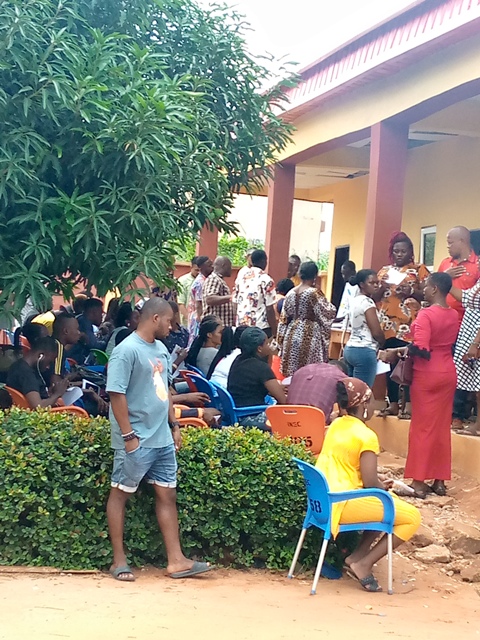 ONITSHA, Nigeria – Since the extension of the deadline for the Continuous Voter Registration exercise and the near conclusion of the primary elections, there has  been a surge in the interest of the masses to complete their voter registration, PVCs transfer or replacement in Anambra state .

At the National Electoral Commission INEC office in Awka, Anambra State capital,  there was a large number of Nigerians waiting to be registered. Our reporter  gathered  that citizens, especially the youths  have begun to show interest  to perform their civil  duty .

The crowds at INEC shows the rate of  last minutes rush by people  for registration.  However , some prospective voters who were at the scene either to  update or obtain fresh Permanent Voter’s Card or transfer have called on the commission INEC to expedite the registration  process.

Those who spoke with our reporter on Thursday said they had visited the office for the third day without success. One Mr Joseph Mmadu said he was not happy to have been locked out on the first day he visited to get a replacement for his lost PVC.

According to him,  he abandoned  his business for the first and  second day just to register. He   expressed hope that the process would be fast enough to enable him  be captured before the close of work.

“Today is my second day  of visiting for this exercise, yesterday we were locked outside the compound but today they let us in but as you can see we are still waiting in long queues. I used to have voter’s card but I  lost it, I want a new one because I want to vote in the next election,” he said.

Also Miss Chidimma Achebe described the exercise as stressful but commended INEC for letting them into the premises. Achebe said she was registering for the first time having attained the age of 18 about  10 months ago. She said she was not aware of the registration exercise until last week.

“It has not been easy, as you can see we are much here, I just wish there was a way they could make this registration faster,” she said.

According to him,  the exercise peaked a few days ago ,while all this months they were not coming. Onyeukwu said the process had been going on since the beginning of the year but people did not take it seriously as they could hardly register more than 10 persons in a day previously.

He said the Electoral Office has adequate manpower and machine to handle  the pressure but pointed out that youths must be patient to wait while the elderly, nursing mother and pregnant women would continue to get preferential treatment.

He  said Continuous Voter Registration was free and that nobody should part with any money before registration. He called on prospective voters  to expose any staff who tried to talk them into bribery to get captured. He said the registration was still ongoing and called on residents to endeavour to be captured