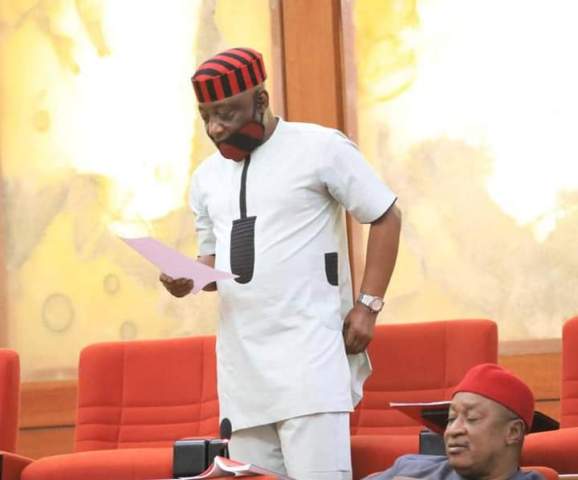 ABUJA, Nigeria – Worried by the continued attacks on Benue South communities by suspected herdsmen and the attendant wanton destruction of lives and properties, the Senator representing Benue South Senatorial District, Comrade Abba Patrick Moro, on Wednesday, moved a Motion on the floor of the Senate to draw the attention of the Upper Legislative Chamber to the recurring decimal.

The Motion entitled, “PERSISTENT UNPROVOKED ATTACKS ON BENUE SOUTH COMMUNITIES: URGENT NEED FOR SENATE INTERVENTION”, sought to bring to the attention of the Senate and the entire country the brazen and sustained killing of the good people of Benue South Senatorial District by herdsmen, the latest being an attack on Igama, Agamudu and Efeche communities of Edumoga, in Okpokwu LGA, resulting in the death of so many people and destruction of properties worth millions of naira.

“NOTES with regrets that there have been recurring terror attacks on farmers and natives of the Benue South Senatorial District over the years by men suspected to be herders without  a suspect arrested by relevant agencies or security operatives.

“NOTES with deep worry that since 2019, I have, before you and the entire country, lamented bitterly on different motion-topics over the incessant unprovoked and ruthless attacks on Communities of Benue South Senatorial District leaving in their wakes loss of many lives and wanton destruction of several means of livelihood worth hundreds of millions of naira.

“DEEPLY saddened that, again, in the early hours of Sunday, June 12, 2022, another vicious and heartless attack has been launched on Okpoliko, Igama, Agamudu and Effeche Communities of Edumoga in Okpokwu Local Government Area of Benue South Senatorial District, leading to loss of many lives and destruction of valuables worth millions of naira. This attack occured exactly two weeks after two young men were gruesomely herdsmen marauder  herdsmen in Oglewu in Ohimini LGA of same Benue South Senatorial District.

“PAINED that survivors of the recent attack have in their numbers abandoned their homes and fled for fear of further attacks  finding refuge in Internally Displaced Camps within the Senatorial District.

“CONCERNED  that more attacks and or possible counter attacks could take place;

“1. Urge the Nigeria Police and other relevant security agencies to immediately move in  to prevent further attacks and carry out a full-scale investigation of these heinous attacks with a view to arresting the perpetrators;

“2. Urge the Federal Government of Nigeria, through it’s relevant agencies to as a matter of urgency mount a comprehensive surveillance at the affected areas to proactively forestall future attacks;

“3. Urge the Nigeria Police  and other relevant security agencies to immediately review their operational mechanism with a view to being more proactive;

“4. Further urge the National Emergency Management Agency to quickly mobilize relief and rehabilitation materials to those many persons displaced by these recent attacks in Okpolikpo, Igama and the other Communities;

“5. Urge the Senate to observe one minute silence in honor of those who lost their lives in the recent attacks on Communities in the Benue South Senatorial District.”

In his remarks, the Senate President, H.E., Senator Ahmad Lawan, said the Motion was timely and very commendable, considering the spate of killings going on in the country.

He commended security agents for their efforts to tackle the challenge and charged them to keep up the effort to make the country safe for the people.

A minute-silence was observed in honor of the victims of the recent attacks in Igama, Agamudu, Efeche and Oglewu communities, as prayed for in the Motion.

Emmanuel Eche-Ofun John is the