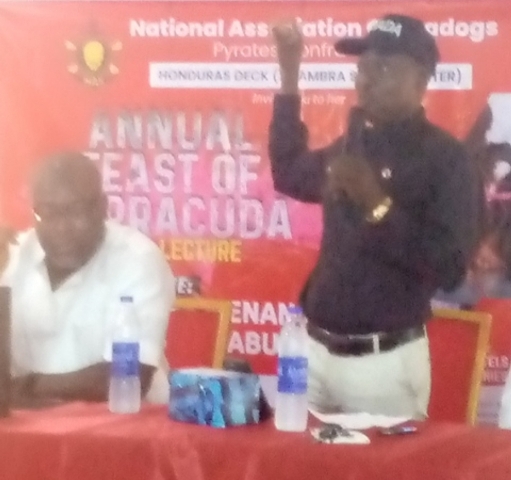 Anambra State President of NAS , Nonso Oguejiofor stated this at Annual Feast of Barracuda (FoB)lecture titled ” Youths and menace of substance abuse” held in Awka Anambra state. He urged members to do all within their powers to ensure that  hard drugs consumption  is eradicated in the society .

“We are here to say no to drug abuse. It is a menace to humanity. We are here to put our heads together, discuss some of these things and put it in our sub-consciousness to speak to the addicts that the practice of drug abuse is wrong,” he said.

“A drug addict is ready to do anything to get the money to buy drugs ,those addicted do not see normal human being as being normal. They go outside their way to do anything in life because they do not  care about the consequences of their actions” he said

He said the victims of drugs  most often  feel  isolated in the society and they only  find comfort with bad   group that will protect them and they  become a problem to the system.

“We  don’t need to  use of force to stop them rather, we should be  talking and persuading them to stop the consumption of hard drugs. it is our duty to make sure that those who are victims  are controlled . Addiction is the root causes of all evil that is associated with criminal activities  in the society , most of them are not normal again. Let do all within our powers to ensure the control and  the use of these drugs in our society ” he added

Ezeonye  represented by the spokesperson of NDLEA, Anambra State Command, Christopher Adabo said millions of talents youths are wasting in the society due to the  constant intake of narcotics and other harmful substances and urged them to abstain from the practice to avoid losing their careers and destiny.

According to her, the heavy intake of stimulants such as cocaine and amphetamine results in decreased appetite, faster breathing and other dangerous diseases that can lead to insanity and loss of focus in life.

The commander who spoke on the theme: Youths and the Menace of Substance Abuse,” noted that individuals who indulge in harmful drugs, risk contracting infectious diseases such as HIV, extreme weight lose, severe dental problems, intense itching leading to skin sores, among many others.

“Drug abuse is an enemy of success and bright future , it kills both the body and the mind. It drains ones income and leads to so many embarrassment, many have sold all their valued properties, engage in many illicit acts and betrayed the trust vested on them to satisfy their drug cravings. Drugs remove human in person and turns them to beasts, “she stated.

According to her, the agency has   busted many  hideouts of drug merchants in the state and it is   seriously working towards  eradicating its use in the state  .

She also decried the poor provision of rehabilitation facilities and centre to help rehabilitate victims of  hard drugs in the state. She  also revealed  that the agency had embarked on grassroots sensitization  to schools to discourage school children from taking part in drug abuse.

Ezeonye urged parents, churches and community leaders to join the fight against the global danger facing the youths.  Members of the confraternity who spoke at event condemned the prevalence of hard drugs and assured to take the message to the grassroots.

LASU: NO PROFESSOR WAS FORCED TO RETIRE