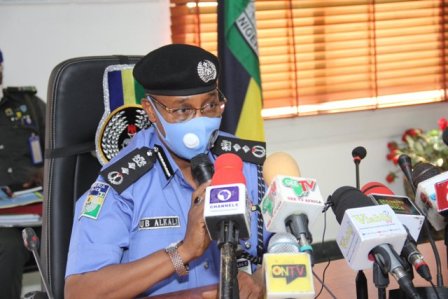 The policeman had on Monday, May 30 ordered that a female Magistrate who reportedly visited the Command on a routine check of suspects in the cell  during Police Duty Solicitor Scheme to decongest  police cell be detained.

The Nigeria Police under the leadership of IGP Ibrahim Kpotun Idris on September 21, 2017 launched Force Order 20, to institutionalized the Police Duty Solicitor Scheme, PDSS, in the Nigeria Police.

PDSS is to address the crisis of irrational and interminable pretrial detention in Nigeria.  A Force Order is a statutory instrument under the Police Act. The Police Act is the law that regulates the operations and powers of the NPF. Force Orders are made by the Inspector-General of Police, IGP, and have country-wide effect.

Lagos State Government had adopted the scheme in the state during COVID-19 lock down and have been making progress. It is on this premise that the Magistrate, who usually sits in Ogba, Ikeja, division embarked on the mission.

Unfortunately on Monday, May 30 at Area D Command Headquarters in Mushin, members of the PDSS met a resistance which led to the lock up of Magistrate who led the team to the Command as a routine check.

ACP Dankoli, was having briefing with the DPOs within the Area D Command when he received information that the Magistrate came to the Command on routine check of the cells said to be jam-packed with suspects at their arrival.

This led to serious disagreement between ACP Dankoli and his second in command and there was confusion at the Command, which led to temporary break down of law and order over the shouting match between the duo of the decision of the ACP to detain the Magistrate.

It was not certain if the matter has been resolved between the Police and the Lagos State Judiciary, which actually sent the Magistrate for the routine duty at the Command.

It took the intervention of the State Commissioner of Police,  CP Abiodun Alabi, before the Magistrate was later released and allowed to go home having been humiliated at the Command.

When the Police Police Relations Officer, SP Benjamin Hundeyin, was contacted on his phone numbers to ascertain the situation of the matter, his phone rang and he did not pick several calls made to him.

Mompha gets date to report on plea bargain in N2bn fraud