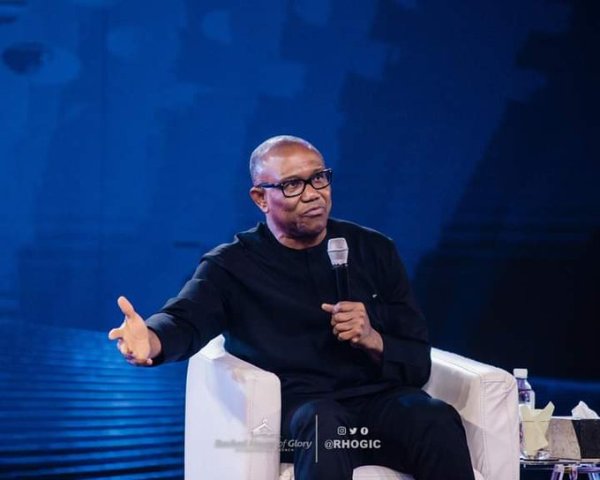 Says you are committing suicide if you collect money to vote

LAGOS, Nigeria – Presidential candidate of the Labour Party (LP), Mr. Peter Obi has warned Nigerians not to collect money from politicians to vote them into power but to vote based on conviction adding that  those who collect money to vote for  anybody are committing suicide.

Obi who also commented on the utterance of the Priest of the Catholic Adoration Ministry Enugu, Rev. Fr. Ejike Mbaka described Fr. Mbaka as an ordained minister of God, his father in faith and a brother.

He explained that though some have warned him about the presence of money bags ahead of the 2023 elections, he said he had consistently called on those exuding such fears to  pray  that money does not determine their faith in 2023.

He equally condemned the actions of the Federal Government by refusing to meet with the demands of the Academic Staff Union of University, ASUU, leading to the current strike, which has kept students at home.

Peter Obi said he has never reneged on agreement and that it was in the same 2009 that he entered into  agreement with ASUU  and he told them what he was able to pay and paid the money gradually.

He said students would not be out of school today if the Federal government has been paying that money gradually. He described government as the major spender in the quest to support businesses and that he never owed any contractor as governor and that all the vehicles he purchased for workers were paid for upfront to support their business.

He explained that it is condemnable that Nigeria is not able to meet up with a quarter of high school intake not to talk of shutting down the schools for a single day.

Explaining his recent trip to Egypt, Obi said it is better to learn to do things before getting there and he is doing it with his personal funds.  “I went to learn with my own funds, you don’t get there first before you learn”, he said adding that while there he was able to meet with officials of the Egyptian Power Industry that were able to  raise total generated power from 20,000 megawatts to 50,000 megawatts in just five years from 2015. He said he also met with the engineers who assisted in the feat, and the civil servants as well as those who financed the projects so that he would not say there is no fund.

He lamented that while Nigeria’s first Prime Minister, ‘Tafawa Balewa borrowed money to develop about 1000 megawatts,  Nigeria has not been able to go beyond 4000 megawatts  in over 50 years and described the situation as unacceptable.

While refusing to trade words with Presidential aspirants that have said one or two  negative things about him, Obi made it categorically clear that Nigerians should see him from where he is coming from  and that none of the Presidential candidates come from a background as rich as his. He described himself as a trader, former banker and former governor, with needed experience to solve inherent economic problems.

“Judge me from where I come from, from all the people, nobody comes from my background, as a trader, a banker and a governor’, he said.

As he puts it, the problem with Nigeria is management of our resources. “All these people have been entrusted with public resources, let them tell you how they managed it, especially now that we don’t have anything, we need somebody who can manage it and bring us out of the crisis”, he said, stressing that those who say he did not do much as governor say so because he refused to share money.

He said that based on his performance he would have been given the Queens Award if he was in England and that he would have won all available awards. As governor, Obi said he was able to link  all communities hitherto unreachable with bridges to enable  traders move their farm products to the  cities and that he also made Anambra State number one educationally across the nation from number 7.

For those who said he was doing using family business, he said he left N70 billion in the coffers of Anambra State and several millions of Dollars with some banks, adding that way back in 2009 he was already entitled to overdraft to the tune of 1 million British Pounds. He added that before he became governor, he was Chairman of ‘Fidelity Bank and director in two other banks and that he was director because of his percentage share in those banks.

Turing to his fellow aspirants, he tasked Nigerians to ask them what they did with public funds that were entrusted into their hands. Senator Bola Ahmed Tinubu was governor of Lagos State, while Atiku Abubakar was Deputy Comptroller  Nigeria Customs, Governor of Adamawa and Vice President of Nigeria.

Confirming the statements made about him by wife of the former Biafra warlord, Bianca Ojukwu , he said  he has given more money than anybody but that the problem is that he has allergy for frivolity.  “I have allergy for wrong spending of money”, he said, adding, “Money is meant to be used for something that is useful, not for any other thing, you have read Bianca’s piece, that is the truth. Since I let government, I have been to over 200 secondary schools, in Sokoto, etc, making donations of  computers etc”, he said.

He said if he is elected, state police will be created in addition to federal police  and that he will turn every state into a production hub instead of the current trend of states going to Abuja to share money.

He said his mission in government is to solve problem and that his prayer is that God should not allow him to arrive if he knows he cannot solve the problems confronting Nigeria, the way he did in Anambra.

He explained that he just joined Labour party and that on arriving,  he assured the chairman, from  the day he joined  that he is going to be part of what they are doing. “Unfortunately for me, the party chairman and leadership, who is supposed to say, we will go to Ekiti, for campaign, did not mention that to me.

“As I speak, maybe I met or did not meet with the Labour candidate in Ekiti, all of us are working hard to stabilise the party. It was too close for us to be dealing with Ekiti and Osun, but more importantly we are organising Labour for the future”, he said.

On pictures of him giving money to traders, he said he gives directly to the women, because, they don’t believe in getting money through prosy but that he did not share money for election but for the traders who are in needed it to survive.

He said LP is working on the greatest coalition with other political parties.