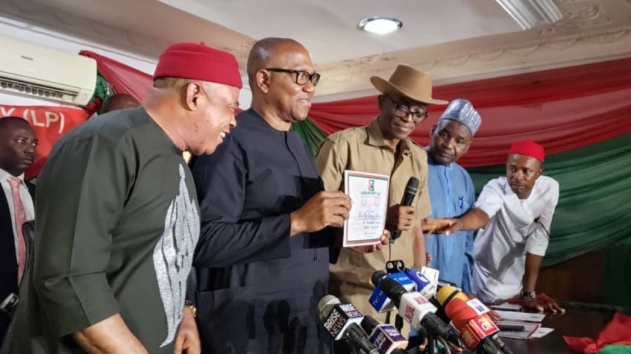 LAGOS, Nigeria – The Presidential candidate of Labour Party, Mr. Peter Obi has been presented with his certificate of return by the party.

Officials of the party presented the certificate to Peter Obi,  the only  candidates  among others with a proven massive support among the Nigerian youths as a result of his  simple and humble way of life,  his gut to speak truth to power; his message of “ nothing more to share”  which has resonated far and wide his desire to transform Nigeria into a productive economy.

He has proved himself as the best candidate, with his profiled life of honesty together with his total grasp of the Nigerian economy as could be seen from his intimidating credentials.

He remains the only candidate that has been able to galvanized a lot of support among the youths without his financial support. He has no money to give but himself to redeem Nigerian from good down hill.  His presence on the social media has dwarfed all other candidates on the social media.

Following insinuation that he has no support in the streets, the youths, including the elderly and the physically challenged  without being egged on, thronged the streets to show their massive support for Peter Obi for his conservative lifestyle devoid of public waste of resources which characterizes the Nigerian politicians.

These messages are all over the internet, well documented in videos.

US to China: Condemn military coup in Burma