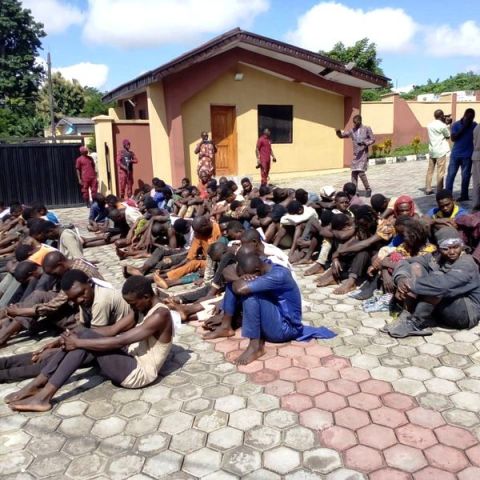 AKURE, Ondo, Nigeria –  The South-West regional security outfit, Amoteku Corps has arrested a total of 71 criminal suspects terrorising the region, among them are two of the terrorists that invaded St Francis Catholic Church Owo, killing scores of worshippers.

Commander of the outfit, Chief Adetunji Adeleye said in a statement that the outfit in collaboration with other security agencies carried out the arrest.

According to him, some weapons, motorcycles  and vehicle were recovered from the suspects.

Among the suspects paraded are 17 motorcycle thieves, 11 cultists and armed robbers, three cattle rustlers among others.

He said the suspects, who were napped at various crime scenes in Owo, Idanre and Akure, the state capital, were arrested with locally made weapons and other items used for their operations

He said the Owo assailants came on motorcycles and hijacked a Golf vehicle on the way, adding that rest of the assailants would be apprehended soon.