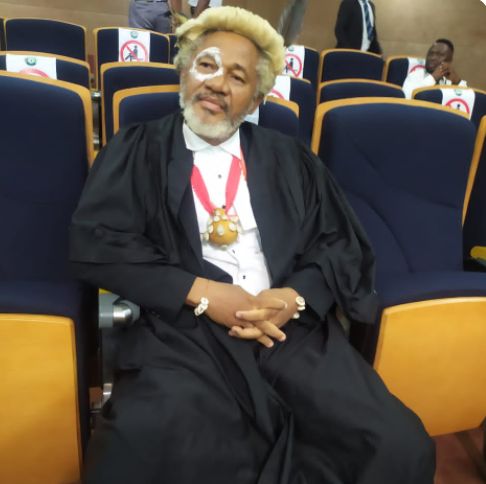 LAGOS, Nigeria – There was a mild drama today at the Supreme Court in Abuja, the Federal Capital Territory of Nigeria, when a legal practitioner, Chief Malcom E. Omirhobo, who practices at the Supreme Court appeared before the justices in local traditional religious attire.

He appeared bare footed, in red under garments, a  necklace made of a small calabash and cowries, bangles made of cowries, a  white lacing round one of his eyes,  with the tiny bells usually won by traditional dancers and masquerades, feathers on his wig and he walked majestically into Nigeria’s highest court, with the bells on both leg heralding his presence.

The justices, who converged in the court after recess were shocked about the development  when they met him in such a grotesque but traditional dressing but pretended as if it never happened.

The court managed to hear one appeal, which it struck out for invalid notice of appeal and thereafter embarked on another recess.

Speaking to journalists after his appearance, Chief Omirhobo said he was forced to dress like he did following the ruling of the court and that there is no extant law that prevents him from dressing the way he did as a practitioner of traditional  religion.

He said he will continue to dress the way he just did and that his children will follow suit.

Baba Ijesha and his road to oblivion