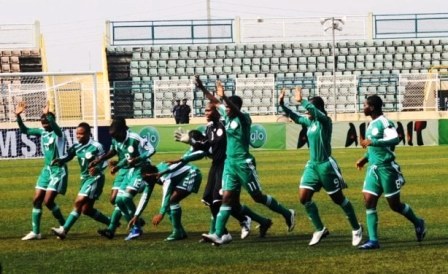 ABUJA, Nigeria – Nigeria is set to pick up another FIFA World Cup ticket in women’s football as the U17 Girls, Flamingos go up against their Ethiopian counterparts in the final round, final leg of their FIFA U17 Women’s World Cup fixture at the MKO Abiola National Stadium, Abuja on Saturday.

The Flamingos won the first leg in Addis Ababa penultimate weekend 1-0, with a strike by goal-a-game forward Opeyemi Ajakaiye, who now has six goals in the campaign.

Officials for the big match are scheduled to arrive Nigeria on Thursday, led by Senegalese referee Mame Coumba Faye, who will take charge of proceedings. She will be assisted by compatriots Adia Isseu Cisse (assistant referee 1), Fatou Bintou Sene (assistant referee 2) and Fatou Thioune (fourth official).

The match commissioner is Aisha Nalule from Uganda while Emmanuella Grace Aglago from Ghana will serve as the referee assessor.

The winner on aggregate will pick one of Africa’s tickets to the FIFA U17 Women’s World Cup in India, already scheduled for 11th – 30th October.

Since the competition was launched in New Zealand in 2008, Nigeria have failed to qualify to participate in only tournament – the 2018 finals held in Uruguay.