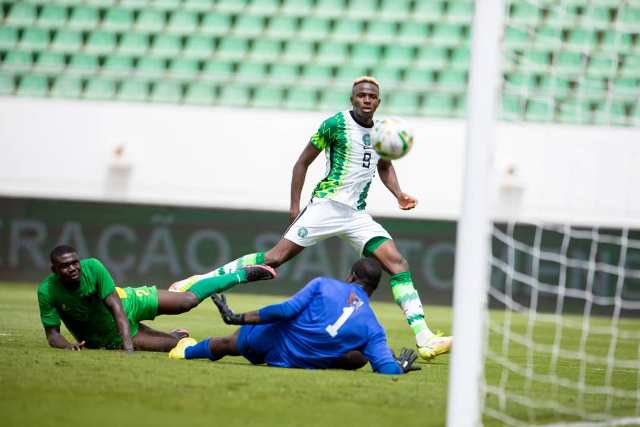 AGADIR, Morocco – In only his second competitive match in charge of Nigeria, 62 –year old Portuguese José Santos Peseiro led the Super Eagles to wallop the National Team of Sao Tome and Principe 10-0 in a 2023 Africa Cup of Nations qualifier in the Moroccan city of Agadir.

The feat by Super Eagles obliterated Nigeria’s 63 –year old international scoring record. Peseiro himself was not born when the Nigeria National Team, then known as Red Devils, defeated Dahomey (former name of Benin Republic) 10-1 in a Kwame Nkrumah Cup match in Lagos on 28th November 1959.

Victor Osimhen, who also scored the winner against Sierra Leone in Abuja on Thursday, scored four of the goals, starting his account with a powerful header that goalkeeper Anastacio Braganca could not just stop in the 9th minute.

As early as the second minute, Osimhen, always fully charged, had flicked the ball with his head from a Zaidu Sanusi pull-out, but there was no Eagle to connect.

In the 19th minute, Terem Moffi’s shot was saved by Braganca as Nigeria dominated easily and with much efficiency, and four minutes later, a good Osimhen header from Ademola Lookman’s corner was again saved by Braganca.

In the 28th minute, defender Ola Aina’s pull-out found Osihmen, who laid for Moses Simon to tap beyond the flailing hands of Braganca for Nigeria’s second. Four minutes later, Sao Tome and Principe had their first shot at Francis Uzoho’s goal, but Luis Leal’s effort went off target.

Moffi wasted two excellent opportunities to take Nigeria higher on the scoreline, in the 36th amd 40th minute, but did just that in the 43rd minute when he beat two defenders to slam into the net from a great Osimhen pass. It was Moffi’s first goal for the Super Eagles.

In the second half, it was all Nigeria. Osimhen’s firm header from pull-out by Lookman in the 48th minute went in for the fourth goal, and seven minutes later, Oghenekaro Etebo fired his 20 –yard free-kick into the underside of the bar and into the net for Nigeria’s fifth. Osimhen thought he had scored a sixth for Nigeria in the 57th minute, but it was ruled off-side.

On the hour mark, substitute Ahmed Musa, only two minutes on the pitch, found an onrushing Sanusi whose cross found Terem Moffi well-placed to slam the ball into the net for Nigeria’s sixth.

Three minutes later, there was another first goal for the Super Eagles. Ademola Lookman found the roof of the net after another Musa pass found Moffi and he chipped over onrushing goalie Braganca.

Osimhen, ever too much to handle, got his hat-trick in the 65th minute when laid on by a sweet Ahmed Musa pass, and in the 84th minute, another brilliant Musa pass found Osimhen in the right place to score his fourth and Nigeria’s ninth.

Substitute Emmanuel Dennis won and converted a penalty kick on the dot of 90 minutes to round up a goal-spangled afternoon for Nigeria in Morocco’s southern coastal city.

The Super Eagles’ next games in the qualification are against Guinea-Bissau home and away in September.

US relaxes COVID-19 protocols on in bound flights

ABIA WARRIOR: MOST OUTSTANDING PLAYER TO POCKET N100K EACH MATCH