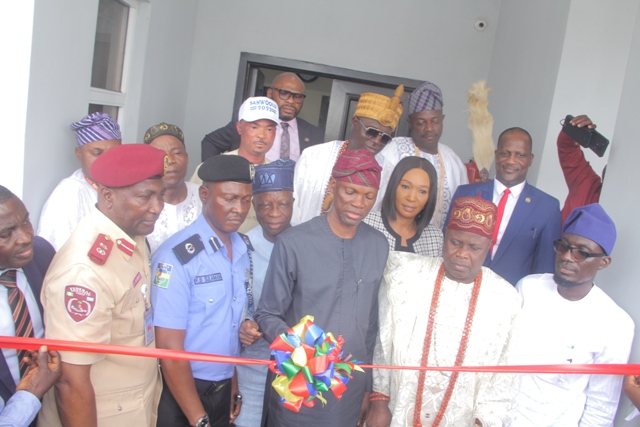 LAGOS, Nigeria – Lagos State Governor, Mr. Babajide Sanwo-Olu on Thursday commissioned and handed over a building to the Department of State Service (DSS) in Alimosho area of the State.

Speaking during the commissioning of the DSS building project in Alimosho, Governor Sanwo-Olu said the ultimate goal of his administration remains that Lagos State becomes one of the top places on the African continent to live, work and invest.

Governor Sanwo-Olu who was represented by his Chief of Staff, Mr. Tayo Ayinde, said one of the sincere assurances of the administration to the good people of Lagos is to work assiduously to create the right environment in which security and safety of lives and property are guaranteed.

He said the DSS building, which the Lagos State Government built to provide conducive office accommodation, is equipped with necessary furniture and facilities, which include Remand rooms, Kitchenettes, Registry, Conference Room and two and one-bedroom en-suite living quarters.

“This administration has been working closely with security agencies in the state in our firm resolve to raise the bar of governance which includes ensuring a well secured and safe environment for investment and other socio-economic activities to thrive. We strongly believe that investment in security must be prioritised because security and welfare of the people remain the primary duty of any government,” he said.

Governor Sanwo-Olu also urged the people of Alimosho and all Lagosians in general, especially the youth to shun crime, cooperate with security agencies and work together to achieve a common aim, because security is a collective responsibility.

Speaking earlier, the Lagos State Command Director of DSS who was represented by a Deputy Director (Administration), Adebisi Akinloye, commended the Lagos State Government for the commissioned building and assured that it would be adequately utilised and properly maintained.

She said the Lagos State Government has been of immense support to the Service in fulfilling its statutory mandate. She commended Governor Sanwo-Olu for his exemplary leadership as the Chief Security Officer of Lagos State, noting that the Governor has left no stone unturned in ensuring peace and security in Lagos.

Akinloye, who also appreciated the Chief of Staff to Lagos State Governor, Mr. Tayo Ayinde for his resolve to always promote the course of the Service being a product of the Service himself, said the Lagos State Government’s gesture to DSS would be reciprocated with hard work and dedication to preserving the relative peace and security of the State.

In his address, the Chairman of the Alimosho Local Government Area, Hon. Jelili Sulaimon, said the singular effort by the Babajide Sanwo-Olu-led administration to construct a building for DSS in the council is a clear testimony of a government that is ready to address the challenges of security.

Sulaimon said the victory of Governor Sanwo-Olu in the just concluded Lagos State All Progressives Congress (APC) primary is an indication of his acceptance by the leadership of the party and the good people of Lagos State and attestation of the Governor’s kind-heartedness, humility and hard work.

“With just three years, you have been able to touch every local government with monumental projects, one of which we have come to commission here today. The electorate in Alimosho Local Government and the five Local Council Development Areas home and abroad, with our full chest, say it loud and clear that your second term project has been adopted as our collective baby. Wherever you go, we also go with you,” he said.

Also speaking, Lagos State APC chairman, Pastor Cornelius Ojelabi; Member of the Lagos State House of Assembly, representing Alimosho I Constituency, Hon. Bisi Yusuf and traditional rulers, among other speakers, drummed support for the election of Asiwaju Bola Tinubu as Nigeria’s next president and the re-election of Governor Babajide Sanwo-Olu during the 2023 general elections.

They also charged all electorate, especially those of voting age, to collect their Permanent Voter Cards (PVCs) for them to participate actively in next year’s polls.