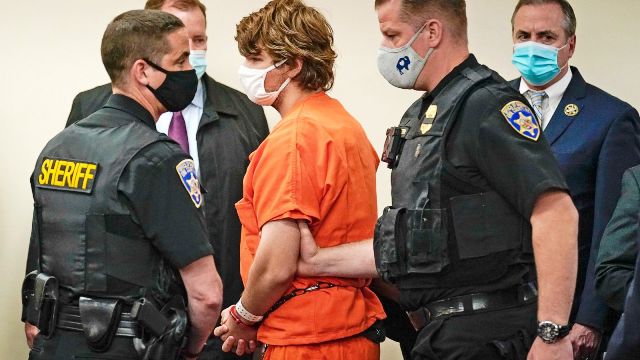 NEW YORK, United States – The Department of Justice today charged  Payton Gendron, the  18 year old boy  of Conklin, New York, who carried out mass shooting at Tops Supermarket in Buffalo with hate crimes resulting in death and hate crimes involving bodily injury and attempt to kill and  use of a firearm to commit murder.

Paython Gendron was the teenager involved in the mass shooting at Tops Supermarket in Buffalo, in the United States that led to death of 10 blacks.

The department  alleged that on May 14, at approximately 2:30 p.m., Gendron, a white male, committed a mass shooting targeting Black people at Tops Friendly Market in Buffalo, New York.

The mass shooting, which Gendron live-streamed on the Internet, resulted in the deaths of 10 Black people and injuries to one Black person and two Caucasian people. The complaint further alleges that Gendron’s motive for the mass shooting was to prevent Black people from replacing white people and eliminating the white race, and to inspire others to commit similar attacks.

At the time of the attack, Gendron was wearing a tactical-style helmet, camouflage clothing, body armor, and a GoPro video camera, and carrying a loaded Bushmaster XM-15 .223 caliber rifle and multiple loaded magazines.

After parking and exiting his vehicle, Gendron shot and killed three Black people in the Tops’ parking lot and injured a fourth Black person. Gendron then fired several shots through the front window of the store before entering, where he immediately shot and killed two more Black people. At that time, Gendron and an armed Black security guard exchanged gunfire, leading to death of the security guard.

After Gendron killed the security guard, he turned and aimed his rifle at a white male Tops employee who, at some point during the attack, had been shot in the leg and injured. Rather than shooting him, Gendron said, “sorry,” to the employee. At some point during the attack, one of the shots also struck and injured a white female Tops employee in the pharmacy area of the store, which is located near the checkout lanes.

Gendron then walked through a checkout lane, and shot and killed a Black person, before moving through the aisles of the store and shooting and killing three additional Black people. Gendron ultimately returned to the front of the store where members of the Buffalo Police Department took him into custody.

When he was taken into custody, officers recovered the rifle used by Gendron in the attack. The rifle had various writings on it, including racial slurs, the statement “Here’s your reparations!,” and the phrase “The Great Replacement.” Investigators have determined that Gendron fired approximately 60 shots during the attack. Two other firearms, a loaded 12-gauge shotgun and a loaded bolt-action rifle, as well as three loaded rifle magazines, were recovered from Gendron’s vehicle after the attack.

Subsequent investigation determined that in the months preceding the attack, Gendron wrote a self-described manifesto containing a detailed plan to shoot and kill Black people at Tops using a Bushmaster XM-15 rifle, a diagram of the interior layout of the store, a discussion of the clothing and equipment that he would use during the attack, and statements that his motivation for the attack was to prevent Black people from replacing white people and eliminating the white race, and to inspire others to commit similar racially-motivated attacks.

Gendron also wrote that he selected the zip code 14208 because it has the highest percentage of Black people close enough to where he lives and that he selected the Tops store because it is where a large number of Black people can be found. The investigation also determined that Gendron traveled to Tops to scout the location on several occasions prior to the attack, including on May 14, 2022, only two and a half hours before the attack.

Upon conviction, the charges in the complaint carry a maximum penalty of life imprisonment or the death penalty. Gendron is currently in state custody pending state criminal charges.

The criminal complaint is the result of an investigation by the Buffalo and Albany Offices of the FBI, the Buffalo Office of the Bureau of Alcohol, Tobacco, Firearms, and Explosives, the Buffalo Police Department, the New York State Police, and the Erie County Sheriff’s Office. The case is being prosecuted by Assistant U.S. Attorneys Joseph M. Tripi, Brendan T. Cullinane and Brett A. Harvey of the Western District of New York, and Trial Attorney Shan Patel of the Justice Department’s Civil Rights Division.

The fact that a defendant has been charged with a crime is merely an accusation and the defendant is presumed innocent until and unless proven guilty.