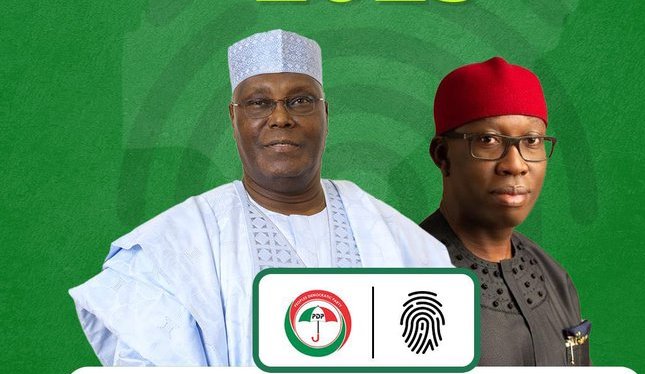 “I am delighted to announce Governor @IAOkowa as my Vice Presidential candidate. I look forward to travelling our great country together, engaging with all Nigerians and building a shared future of peace, unity, and prosperity for all. As One We Can Get It Done”, Atiku Abubakar said.

In his response, Okowa said, “ I pledge to join hands with His Excellency, Alhaji Atiku Abubakar, the leaders and stakeholders of our party, and all patriotic Nigerians to rescue our country from the precipice”.

Prior to Okowa’s emergence, speculation had been rife that Nyesom Wike will be Atiku’s running mate. Analysts were of the view that Wike may have lost out as a result of his strong personality, his vocal nature. Besides, Rivers state is hardly seen as part of the South East.

We gathered that the committee favoured Okowa as a result of his calm and calculative nature, his knack for loyalty and his strong affinity with the South-East, Delta State being a combination of  Urhobos, Itsekiris, Ijaws and Ibos.

Okowa is seen as a strong bridge between the South South and the South East.

Partner with me, take over leadership, Accord presidential candidate tells Nigerian youths