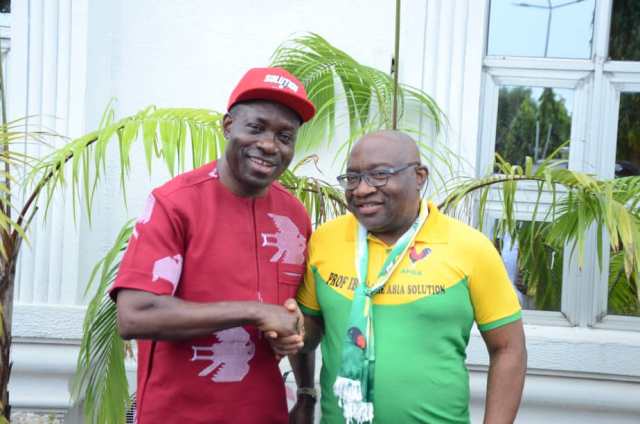 ONITSHA, Anambra – The Governor of Anambra state Prof Chukwuma Soludo has congratulated members of All Progressives Grand Alliance (APGA) in Abia state for decisively electing Prof Gregory Ibe as governorship candidate of the party in the forthcoming 2023 general elections.

Speaking when he received a delegation led by Prof Ibe on a courtesy visit in the Anambra Governor’s lodge Awka, Prof Soludo commended the peaceful manner in which the Abia state APGA gubernatorial primary election was held, asserting that the successful outcome is indicative of the people’s desire and hunger for change.

He described Prof Ibe as a world class technocrat and intellectual entrepreneur of repute  and that Abia desperately needs Ibe to transform the state.

The governor, therefore enjoined all members of APGA in Abia state, especially those who contested for the position of governor with Prof Ibe during the primary election,  to join forces with him in order to secure victory for the party during the general elections.

He promised to bring his many years field experience to bear on the campaign train at the right time.

According to Soludo, APGA is the only political party in Nigeria that enshrined the concept of restructuring in her constitution and therefore remains the best platform to champion  the much needed transformation of the entire nation.

He therefore enjoined leadership of the party to initiate strategic alliances and robust engagements with other like-minded individuals, groups and organizations in order to reposition her and indeed the South East for greater participation in the act of national governance.

Prof Ibe had earlier informed his host that he came to formally congratulate him on his assumption of office as Governor of Anambra state and subsequently identify with his administration.

He was accompanied on the visit by the Abia state Chairman of APGA, Rev Augustine Ehiemere, some members of the party’s State Working Committee, Prince Emeka Okafor, Director-General of his campaign organization and some directors.

APGA will produce next governor in Abia in 2023

N6BN SUIT: YOU HAVE A CASE TO ANSWER, COURT TELLS DAKUKU PETERSIDE