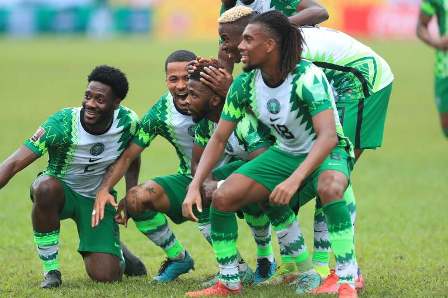 ABUJA, Nigeria – Following their arrival in New Jersey from Dallas on Sunday, three –time African champions Nigeria have stepped up preparations for their friendly match with Ecuador on Thursday evening, as well as next month’s AFCON 2023 qualifying matches against Sierra Leone and Mauritius.

A rampant Mexican side were lucky to win a game of two halves at the AT&T Stadium in Dallas on Saturday, with the Eagles showing great spirit and creating a number of chances in the second half after settling down to the prestige friendly, following long-haul flights into the United States from across the world.

“We were unhappy to have lost to Mexico because everyone worked very hard. The issues of long travel and little time to adapt to the new zone affected us all in the first half, but we created a raft of chances in the second half and were unlucky to have lost.

“Nevertheless, we have taken on board a lot of lessons from the game and they will be quite useful in subsequent matches,” captain William Ekong told thenff.com in New Jersey on Monday evening. Ekong heaped plaudits on the four home –based professionals who were given opportunities in the second half, saying they were tireless and showed composure and confidence against the El Tri.

“Everyone has been great here with good attitude and response at training. However, I must specially commend the team mates from the Nigeria Professional Football League who have shown poise, pace and power and also commitment; they have no doubt raised the NPFL’s profile with their attitude and performance.” Defender Sani Faisal, midfielder Chiamaka Madu and forwards Victor Mbaoma and Ishaq Rafiu came into the fray in the second period.

Having divested themselves of procession and environmental issues (long-haul travels and time zone body reaction), the Eagles filed out for full training session at the Montclair State University pitch on Monday, with most of the players showing the usual enthusiasm, energy and sharpness.

Only defender Olaoluwa Aina, who suffered a knock during the team’s first training session in Dallas, and midfielder Innocent Bonke, who copped a knock in Saturday’s game against the Mexicans, stayed out of the grueling session to do light recovery training of their own.

The Eagles will file out against Ecuador at the Red Bull Arena in Harrison on Thursday evening, as from 8pm ET (1am on 3rd June in Nigeria).

However, Peseiro says his crew is not losing focus on the AFCON 2023 qualifying games, with the Eagles due to take on the Leone Stars at the MKO Abiola National Stadium, Abuja on Thursday, 9th June before flying to Saint Pierre to take on Mauritius on Monday, 13th June.

Ifeanyi Uba: My performances in the senate will speak for my re-election