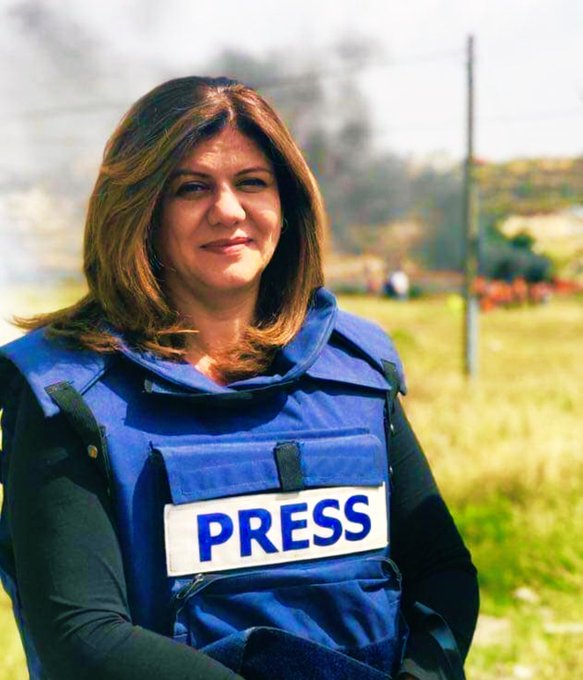 Even in death, Shireen was a threat to Israeli forces, they attacked her casket borne by pall bearers

JENIN, Occupied West Bank – Shireen Abu Akleh, the 12th   Al Jazeera journalists to be assassinated by the state of Israel was today laid to rest at a cemetery in Mount Zion besides his late parents in the Occupied East Jerusalem.

Shireen Abu Akleh(51) a citizen of Palestine and the United States was shot on Wednesday in Jenin, in the Occupied West Bank in the forehead, while she was clad in complete journalist vest, with a crash helmet clearly marked Press.

The Al Jazeera journalists and her colleagues were in Jenin, very close to the refugee camp to cover routine raid by Israel in the  area but she was killed in cold blood underneath a tree by a concrete fence where she and her colleagues were sheltering.  A male colleague, Ali Al Samoud was also shot on the back and recuperating in hospital.

Ironically, less than 24 hours after she was murdered, Israeli police stormed her family house where family members and sympathizers were mourning her to remove Palestinian flags hanging around the building. Al Jazeera is reporting that 4 Palestinians have been arrested for hoisting the Palestinian flag.

Meanwhile, her family home has been strategically decorated with flags of Shireen Abu Akleh with symbolic messages, such as “Goodbye to the voice of Palestine”. Earlier her corpse was laid in state at the Presidential compound in Ramallah before the body was moved to a French hospital in the Occupied West Bank.

In the courtyard of the hospital hundreds of mourners gathered with eagerness to match on foot for more than 45 minutes to Cathedral of the Annunciation of the Virgin.

But as the casket moved, the crowd of mourners is thrown into a frenzy with the security forces in anti riot uniform attacking the mourners, even those carrying the casket, beating them and  shooting teargas to disperse innocent people mourning the dead.

The casket was almost dropping to the floor, but the pall bearers managed to move the casket  into a nearby hearse against the wish of the mourners who wanted to walk about 45 minutes to the church where the funeral was held.

Many who hung on the casket inside the hearse were forcefully dragged out by the security forces. Eventually, the casket arrived at  Cathedral of the Annunciation of the Virgin in occupied East Jerusalem from where it will proceed to Mount Zion, where Shireen Abu Akleh was buried.

But this time, unlike in the compound at the hospital, the Palestinian pall bearers were allowed to walk on foot with the hundreds of mourners to the cemetery.

Shireen was a foundation staff of Al Jazeera and has worked for the channel for 25 years. She witnessed so many atrocities committed by the state of Israel against Palestine and her organisation.

Shaping the African narrative one talent at a time