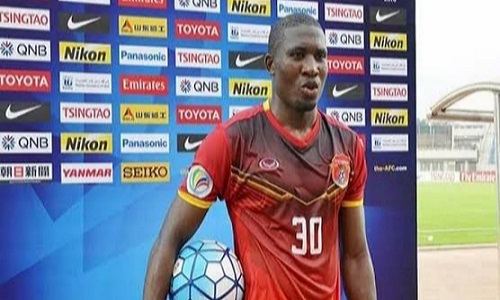 ABUJA, Nigeria – A football player of Nigerian origin, Christopher Chizoba Iyikwobe has been slammed a two-year worldwide ban from the game after a request by the Bangladesh Football Federation for the ban placed on him by the Federation to be rendered global was granted by world governing body, FIFA.

The Bangladesh Football Federation had placed a two-year worldwide ban on Iyikwobe on 26th September 2021, and subsequently appealed to FIFA to give it worldwide effect.

FIFA has now granted the request and Iyikwobe remains suspended from all football –related activities globally until 26th September 2023.

In a related development, the Confederation of African Football has appointed Namibian official Antsino Twanyanyukwa as the referee for next week’s FIFA U17 Women’s World Cup final qualifying round first leg match between Ethiopia and Nigeria in Addis Ababa.

Twanyayukwa will be joined at the potentially –explosive encounter, scheduled for the Abebe Bekila Stadium as from 4pm Ethiopia time on Friday 20th May, by compatriots Eveline Augustinus (assistant referee 1), Pulen Agnes Mahomo from Lesotho (assistant referee 2) and another Namibian Vistoria Shangula (fourth official).

Amina Ali Karuma from Tanzania will serve as match commissioner while Ugandan Constance Adipo will be referee assessor. Nigeria’s Flamingos prevailed over their Egyptian counterparts 6-0 on aggregate in the last round, after dismissing their counterparts from the Democratic Republic of Congo 8-0 on aggregate.

The Ethiopian girls edged into the third round of the series after overcoming Uganda on the away goal rule following a 3-3 aggregate, and then turned back South Africa 3-1 on aggregate in the last round.

For the second leg match already scheduled for the MKO Abiola National Stadium, Abuja on Saturday 4th June, CAF has appointed Senegalese officials to preside over proceedings, with Mame Coumba Faye at the centre.

The winner on aggregate will pick one of Africa’s tickets to this year’s FIFA U17 Women’s World Cup finals, holding in India 11th – 30th October.

Injured Abdullahi out of WAFU B Championship

Ukraine: Shell to sell retail and lubricants businesses in Russia

JIDE KOSOKO, JOMBO SCARED AS NIGERIA FALLS IN GROUP B FOR RUSSIA 2018