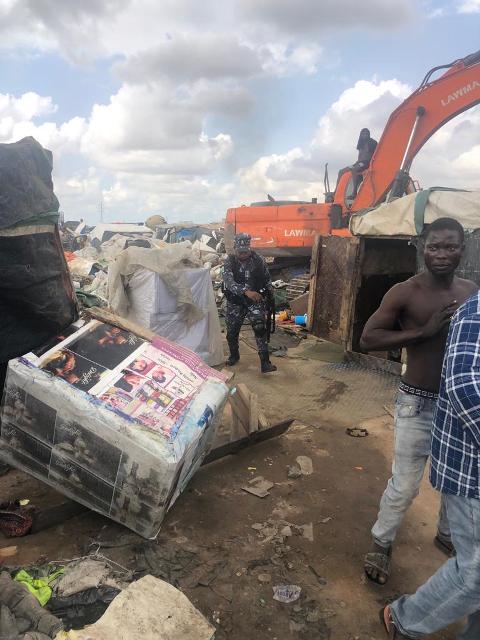 LAGOS, Nigeria- The Lagos State Taskforce in conjunction with the Ministry of the Environment has carried out a cleanup exercise of the refuse site located at Olusosun in Ojota axis of the state.

During the exercise, 9 traffic robbers were arrested in the hideout. The activity which lasted for several hours was spear headed by the Chairman of the Lagos State Taskforce, CSP Shola Jejeloye who stated  that the cleanup exercise  was necessary considering the health and environmental hazards posed by the dumpsite to Lagosians transiting or residing within the area.

Jejeloye further stated that the dumpsite has been a known haven for criminal elements who engage in so many forms of criminal activities one of which is traffic robbery.

“We have carried out raids on this dumpsite in the past and made some arrests of suspects with dangerous weapons mostly used for robbery in traffic. Clearing up the site now will definitely reduce the incidents of traffic robbery and pickpocketing around here”.

A total number of 9 suspected traffic robbers were arrested at the site during the exercise and found on them were dangerous weapons used to intimidate their victims during their operations.

CSP Jejeloye hinted that the exercise which kicked off over the weekend would be continuous and thorough in order to ensure that cleanliness and hygiene is achieved and maintained on and off the dumpsite.

He urged Lagosians to ensure that their waste are disposed properly in the designated waste bins and not littered across the street which could eventually block the water drainages in the State and eventually lead to flooding.

“Environmental offenders who engage in activities that pollute the environment will be arrested and prosecuted in order to serve as a deterrent to others. All hands must be on deck to ensure that Lagos State is clean, serene and habitable for all,” he concluded.

CATHERINE DEBUTS WITH AFRO-HIGHLIFE, ‘NA YOU’