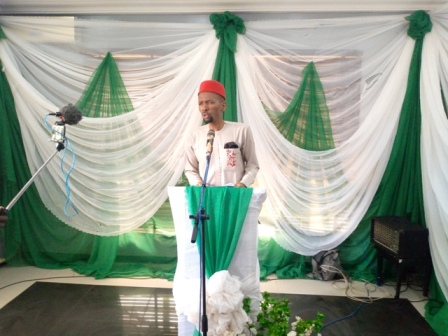 AWKA, Anambra, Nigeria – A 38 year old economist Hon. Onyeka Young Nwafor has declared his intention  to contest for the  president  of the country on the platform of National Rescue Movement (NRM).

Onyeka, while declaring his intention in Awka Anambra state on Saturday said he will use his youthful energy to fight insecurity, especially kidnapping and banditry in the country. He  said that if elected the president of the country he would revolutionise the education, health sector and agriculture to build the nation’s  economy.

According to him, what the country needs is a young and dynamic person who can work round the clock to create wealth, restructure the health and economic sector to boost the nation’s development.

He stated the Nigerian youths and others have lost confidence in the country and he would restore confidence if elected as the president of the country.

“Over the years, our elected and appointed government officials have made vast majority of our very intelligent teaming youths lose faith in the very fibre that holds us together as an indivisible and indissoluble nation, due to their lack of commitment to their electioneering campaign promises and party agenda.

According to him, fixing the  problems enumerated requires a holistic focus on four key areas,  Education, Security, Health and Electrical Power Supply.

He said that he would apply  a large sum of the nation’s budget to revamping the education sector , ensuring security of life and properties, providing a well-equipped health sector and ensuring steady and uninterrupted electrical power supply across the nation if elected .

He said that he would magically eliminate the myriads of problems currently bedeviling the nation and place Nigeria on the global limelight of development.

Onyeka said that Nigeria  inability to achieve a sustainable efficient system is largely attributed to the continued absence of credible, selfless and purpose-driven leaders.

According to him, the nation’s  elective and appointive offices are populated by selfish, unpatriotic and power-drunk political musketeers who do not have the interest of the nation at heart.  He called on the electorates to drop religious, tribal, ethnic and ideological rivalries and come   together towards making Nigeria a better place for both the rich and the poor.

I have demonstrated a convincing degree of patriotism through various social and economic intervention projects to the masses without ethno-Religious boundaries or sentiments; which ranges from provision of clean water, free medical outreaches, award of scholarships, poverty alleviation programs, free legal aid to the indigents, skill acquisition and economic empowerment for the middle and small scale business owners, as well as varying security fortification projects with some security agencies. All these I have been able to accomplish and sustain as a non-political office holder” he said

On how to fund his campaign , he stated that he has  extensively consulted with his  family members, friends, elder statesmen, traditional and religious leaders, genuine business moguls and the masses across the country.

He also stated that he had visited over 25 states of the nation and made contacts on how to move the campaign.

According to him, he has people in all the 774 local area of the country who will carry the message across. He  urged  Nigerians  to tilt  their  choice of candidate not towards the highest bidder, but in the direction of someone with clear-cut agenda and the requisite integrity to deliver on his campaign promises and party agenda.

Ohuabunwa: I offer myself to take the bullets to return Nigeria to past glory

Era of haphazard contract awards over at NDDC – Ojougboh