SARS and SWAT as a metaphor for a failed government: Thumbs up for visionary Nigerian youths 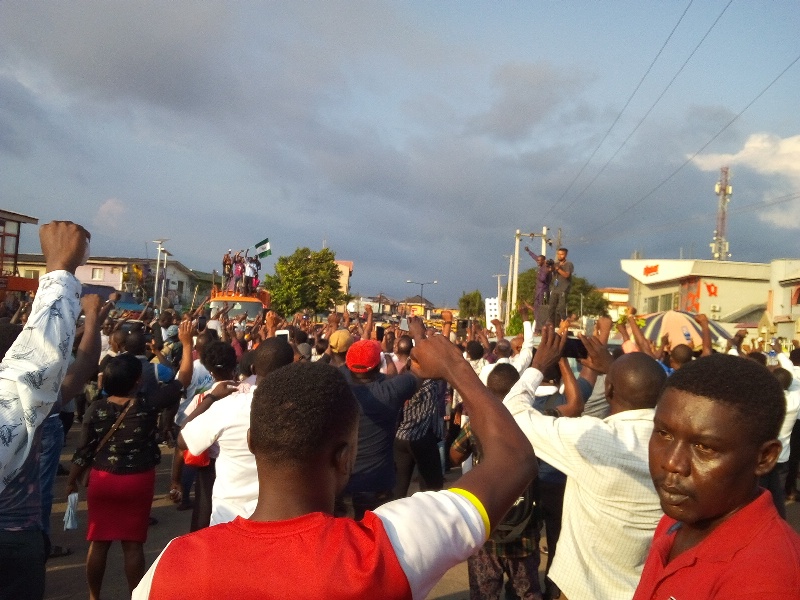 LAGOS, Nigeria – For decades, I had stridently beckoned on the Nigerian youths to join some of us patriots in the dangerous Nigerian trenches, to win the heart and soul of Nigeria, and take  their destinies in their own hands .

Many of the rulers of today  have tenaciously glued themselves to government (like aradite) , either directly or indirectly. They stay put in Aso Villa through their proxies, minions, acolytes, agents, servants, friends, school mates, kinsmen and kins women, or even kindred family members.

Some of these sit – tight rulers were only in their 20s and early 30s when they were already military Generals, Governors, GOCs, Brigade Commanders , Ministers, Commissioners, etc. They have never had any professional or occupational address. Only political addresses. General Yakubu Gowon, for example, was only 32 years old when he prosecuted the 3 year bloody Nigerian fratricidal civil war as a military General and Head of State . And wait for it : he was a mere  bachelor.

He only married his wife, Mrs Victoria Gowon, when he was already Head of State. Late Dr Matthew Mbu was minister of Labour at a mere 24 ; and High Commissioner to the UK at 25!.

Today is an age where the youths are still struggling through tears, sweat, pains, pangs, blood and sorrow, to go through 100 or 200 level ; or merely gain ordinary admission into our tertiary institutions.

SARS or SWAT, by whatever name called, are the same 6 and half a dozen ; the same moin moin, akara and beans ; the same Hamlet and the Prince of Denmark. For the entire lifespan of this clueless and highly propagandist government, I have been screaming on roof tops about its bad governance style and its irredeemably corrupt posture .

I dripped oceans of ink, writing tons of articles, press releases and giving countless lectures. I made dozens of television and radio appearances on possible solutions or panacea to our national malaise . I was ignored, barely tolerated. Some rabidly politically partisan persons were even unleashed on me as raving attack dogs.

Their social media cliques, those Prof Wole Siyinka derisively described as “crawling but unseen Internet millipedes” (some of them grand mothers and grand fathers) , insulted any and every Nigerian that dared criticise their deity, nay, their infallible god, President Buhari.

Kakaaki were used to herald his exit from and entry into Nigeria. Aircraft maintained by Nigerian tax payers’ money were packed for months at Heathrow Airport, while their pilots and crew luxuriated idly in 5 star hotels. They all patiently awaited the full recovery from health challenges of their idol and totem of messianic redemption.

The government, through its attack dog, the EFCC (where is Magu today? ; the ephemerality of power !!! ), then decided  to intimidate, browbeat and overawe me. I refused to bend to their arbitrariness, whimsicality and capriciousness . I valiantly criticised, critiqued and interrogated the impunity of this government.

I challenged raw power and dared the viciousness of the government and its awesome security apparatchiks . I knew I was on the right path. Thank God He has kept me safe under His bedspread canopy, from their rampaging goons. Some government apologists and spokespersons came roaring, but defensive .

They said the Buhari government was the best thing to have ever happened to Nigeria. They wondered why we couldn’t see what they were seeing. To them, there is no hunger, decease, squalor, depression or melancholy in the land. These were merely simulated by haters of Buhari and his government.

These views were merely peddled by corrupt politicians and ‘defenders’ of corruption. Indeed, ‘corruption was fighting back’. They said ‘Sai Baba’ was the messiah Nigerians have been patiently waiting for. I reminded Nigerians of Buhari’s first disastrous outing between December 31, 1983 and August 27, 1985. It was indeed the locust years.

It was 20 months of regrets, gnashing of teeth and mass poverty. It was an era when Nigerians were openly flogged on their bare buttocks in the name of War Against Indiscipline ( WAI). It was a  shameful era when Decrees 2 and 4 reigned supreme ; an era of detentions without trial ; when truth was punished once it embarrassed the imperious government of the day.

The present fawning and bootlicking Buharists and Buharideens would hear none of these historical facts .They argued that the maximum dictator had changed completely from his autocratic and totalitarian nature and had suddenly undergone some form of Saul – to – Paul transfiguration, to become a born again democrat.

To them, Buhari would even teach Abraham Lincoln the true meaning of democracy ( not Lincoln ‘ s 1863 Gettysburg Declaration). These obsequious sycophants and flatterers readily showed us Buhari’s newly well starched agbadas and babaringas, expensive eye glasses and designer wristwatches and skin shoes , as signs that he had  undergone permanent metamorphosis.

I told them it was never possible for a leopard to change its spots, just as it was impossible to jump into the river without getting wet. So, the youths were getting agitated and tired. They had been out of school for many months. The Covid-19 lock – down had compounded their problems. Young girls took to prostitution, standing by the kerbs of major hotels on cold lonely nights, looking for paying ‘ customers’, to eke out a living with their suffering parents.

Many of the youths, frustrated, travelled across deserts and seas seeking greener pastures and  perishing in the process. Some took to internet scams, becoming ‘yahoo boys’. Eye – serving anti – graft agencies went after them with the ferocity of a hurricane Katrina. They were happy to display these boys as a diadem of their ‘achievements’ on their so called ‘war against corruption ‘.

Meanwhile, they were merely pursuing butterflies while their house was on fire. They conveniently turned their eyes away from the real pen robbers, the historical revisionists, the re-looters of recovered loots. They readily forgave any Nigerian politician who decamped from the opposition to their party. Like Naaman  the leper who dipped himself in River Jordan 7 times and became cleansed of his leprosy , such thieves of our common patrimony became deodorised of their lecherous and thieving sins.

The despondent youths watched with amazement from the sidelines, how their future was being  stolen bare – facedly, by installments, by shameless fathers, grand fathers and great grand fathers, whose children were  idling away in ivy schools abroad. They knew the day was nigh for them to bare their fangs.

The youths feel cheated by a government driven by executive lawlessness, legislative thievery and rascality and judicial injustice, where justice is rationed to the highest bidder, especially money – wielding and influence – peddling political buccaneers. They became more convinced that SARS killings, extra judicial murders, accidental discharges, illegal toll – collecting road blocks, extortions and police brutality and bestiality, would never stop except they acted. They knew it was time to take charge as a mass movement that required no leadership that would easily compromise and sell to government nichodemously at night. They couldn’t understand why the NLC would suddenly capitulate after raising hopes of mass action by angry Nigerians against a compassless non – performing government.

The youths knew they were already on the ground, and that he who is already on the ground fears no further falling. They knew they would go below ground zero, far far below India, as the poverty capital of the world, except they acted. They were convinced Nigeria does not deserve to be the number 148 out of 180 most corrupt countries in the world, and number 3 in West Africa. They could no longer tolerate the ceaseless banditry ravaging the country ;  the increased Boko haram insurgency, heightened kidnappings, murders, armed robberies and suicides.

They became tired of joblessness, stigmatisation as ” lazy youths”, when all they desire is fair and equal opportunities to actualize their dreams in a directionless and unsympathetic contraption called Nigeria.  They knew enough was enough, because their “mumu don do”. So, the Nigerian youths have been on the streets and in the trenches for nearly 2 whole weeks now , and still counting, using “#ENDSARS” as a metaphor and allegory of a failed, wobbling, groggy, fumbling and crumbling government and nation .

I commend the Nigerian youths for standing up to their rights, with eternal vigilance as the only price they have to pay for their liberty (Learned Hand) . Never again will any government take the civil populace, the people, for granted. The people are the real owners of power.

Those in government are their servants. The dog wags the tail. The tail does not wag the dog. Kudos to the Nigerian youths, as they continue their genuine struggle of liberation and emancipation from despotism, fascism, autocracy and absolutism.

PUTIN UNDER FIRE OVER BAN ON JEHOVAH’S WITNESSES

VICTOR UMEH, A DOGGED FIGHTER AT 54