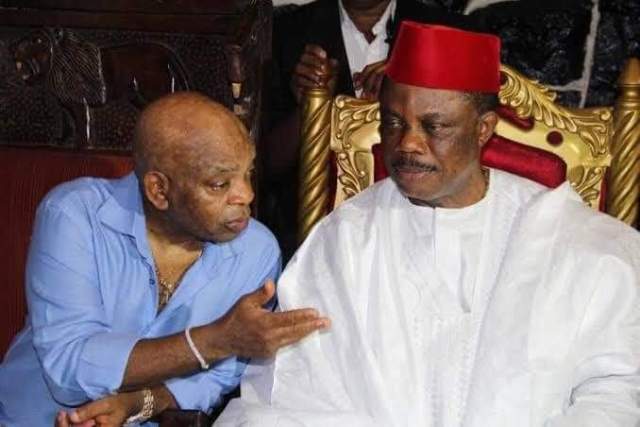 AWKA, Anambra, Nigeria- The political intrigue in Anambra state is usually elevated to a very high level whenever the state governorship is approaching.

It has become a perennial occurrence at every electioneering period; if it is not intraparty crisis, it would be a state squabble with influential group or individual, which most often creates tension.

Currently, the governor of Anambra State,  Mr. Willie Obiano is in a serious showdown with traditional ruler of Ukwulu Kingdom in Dunukofia Local Government of Anambra State, Igwe Peter Uyanwa, and the oil magnet Prince Arthur Eze  over  sundry  issues and going by  the scenario playing out in the state the governor may be  facing one of  the hardest battle in his political life.

The ongoing war between the governor and the dou, certainly will make some political statements, either for good or bad in the state.

Recently, when the police Zone 13 was inaugurated in Ukpo, Dunukofia Local Government Area of Anambra State, the home town of Arthur Eze, the governor did not attend, neither did he send any representation.

It was learned that the governor had issue with Arthur Eze over where to site the Police Zone 13, headquarters in the state. It  was alleged that the governor had wanted the headquarters to  be located in Aguleri, his home town, but Eze took it to his own home town Ukpo because he was the major facilitator to the creation of the zone. This development according to sources did not go down well with Obiano.

Read also, US WIELDS THE BIG STICK AGAINST HUAWEI, AFFILIATES

Eze claimed that citing  Zone 13  in Ukpo along Onitsha –Enugu expressway was more central  and accessible than Aguleri. Till today, the governor is yet to commend Prince Arthur Eze for influencing the creation and citing of the zone in Anambra State. Besides, he is yet to comment on the development in the state.

Obiano is fighting a battle he cannot win. We are the people who make governors, so governors cannot dictate to us what to do. I have been in and around government since 1970, and within that period I have made many governors in Nigeria-Arthur Eze

For many, the governor was not happy with Prince Arthur  Eze of Ukpo for not taking the Zone to Aguleri. Shortly after, Arthur Eze invited the traditional ruler in the state and told them the governor was denying them five percent local government allocation by not conducting council poll.

He even threatened to sue the governor for failure to conduct local government area elections. Few days later, Eze gathered the traditional ruler in his country home in Ukpo and told them that Anambra 2021 should not be zoned to  a particular senatorial zone but that it should be  made opened to the  only competent person from the state.

According to him, Anambra state has gone beyond zoning to have the best hand to lead the people.  At the event Arthur Eze also commended President Mohammadu Bihari for his infrastructural development in the south East, especially in Anambra State.

It was believed in many quarters that the traditional ruler was suspended because he led his follow traditional rulers to Arthur Eze’s place to support the no-zoning principle  as canvassed by the oil magnet.

According to the state government, the traditional ruler was suspended for being traditional ruler and Chairman Council of  Traditional Rulers in Anambra Central due to several petition against him from his community and elsewhere.

According to the him, the worst the governor could do was take his certificate and that he cannot tell him how to govern his people. He also accused the governor of purportedly removing  him for supporting President Muhammadu Buhari and backing Arthur Eze against zoning Anambra state governorship.

If what we said about Buhari is what makes me a rebel, I will repeat it 100 times and we will never cease to thank Buhari for what he is doing in our state, Anambra and the entire South East. There is the Enugu International airport, second Niger bridge, Enugu – Onitsha Expressway and very many more projects.

The monarch said that the governor cannot remove him, and that the best he could do was to retrieve his certificate, which he said has no bearing on how he rules his people.

“If what we said about Buhari is what makes me a rebel, I will repeat it 100 times and we will never cease to thank Buhari for what he is doing in our state, Anambra and the entire South East.

“There is the Enugu International airport, second Niger bridge, Enugu – Onitsha Expressway and very many more projects. I remain the traditional ruler of this community and no one can remove me. I give respect to whom respect is due. If I talk I will die and if I don’t talk I will die, so it is better to talk and die.

“We shall soon be going to see Mr President. We thank Arthur Eze who will be leading us to the president. Arthur Eze has done what the governor could not do. He even held a meeting with us and the Miyetti Allah leaders and told us to always come to him if cattle breeders destroy crops in our communities, that he is ready to pay, instead of farmers having clashes with herders.

“To Obiano, I can only ask him to keep his certificate, I do not need it, I do not need certificate to lead the people of Ukwulu.” Some other traditional rulers of various communities in Anambra  have supported their colleague, thereby blaming Obiano for meddling in the affairs of traditional institution.

They had also paid solidarity to the Igwe of Ukwulu, pledging their supports. The Monarch of Nawfia community, Igwe Chijioke Nwankwo in his own  said, “the the traditional rulers have nothing against Obiano, saying he is their brother and  son. According to him, If Igwe Uyanwa has done anything wrong, we the monarchs of the state should be told stating, after all they were in the meeting where Arthur Eze spoke. Speaking also, the monarch of Abagana, Mbamalu Okeke said, “Arthur Eze spoke to us about zoning and we saw reason in what he said and supported him.

“If you say only Anambra south will contest for the governorship, then they need to come to us for negotiation with other zones. Obiano is meddling in things that does not  concern him. The traditional

institution is older than the government, and not even the governor can do otherwise. We cannot be under the commissioner. Those who are in authority must show maturity. Anambra is one and the governor should not cause division in the state. After all, his party All Progressives Grand Alliance APGA is not the only party in the state.

Obiano should go and intimidate his workers not traditional rulers.” While addressing the monarchs during their solidarity visit said, “Obiano is fighting a battle he cannot win. We are the people who make governors, so governors cannot dictate to us what to do.

“I have been in and around government since 1970, and within that period I have made many governors in Nigeria. Since Obiano is not ready to pay you people (traditional rulers), I shall be giving N200,000 to each monarch every month. I shall also give N10m to former LGA chair to pursue their matter in court, against the governor.

“As for you traditional rulers, your matter is settled because I have reached President Buhari, and he is willing to meet with you people.”

The Anambra Ekunie and Ukwulu Development Union, Malaysia branch took  a swipe on Obiano for suspending  the traditional ruler of Ukwulu community, HRH, Igwe Peter Uyanwa from office. The groups said that the traditional ruler was suspended for disagreeing with the state government on the issue of zoning of the state governorship ticket ahead of the election coming up next year.

President of Anambra Ekunie, Dr. Ifeanyi Anachusi said that Governor Obiano was chasing shadows instead of focusing on how to rescue the state from its myriad of problems.

He called on Obiano to conduct council elections rather than fighting a war he cannot win. He also said the action of the state government confirmed its earlier alarm on the plot by the All Progressives Grand Alliance, APGA-led government to clampdown on the traditional institutions to push through its agenda of zoning the 2021 governorship to Anambra South.

“Today, we have been vindicated. Gov. Obiano went ahead to suspend Igwe Peter Uyanwa irrespective of his right as a citizen of the state to hold and express his political views. Every citizen of Nigeria is protected by the constitution of the republic which guarantees him or her freedom to associate freely and to participate in the governance of his state.

governor introduces hook, line and sinker. We are not aware of any such laws. What Obiano has done is to demonstrate his gradual descent into dictatorship,” Anachusi said.

Ukwulu Development Union, Malaysia, blamed Governor Obiano for handing down one-year suspension on their traditional ruler, Igwe Peter Uyanwa, who is also the chairman of Anambra Central Traditional Rulers Council. President of the Diaspora group, Nze Thomas Chujekwu, described the suspension as an act of intimidation and display of high handedness.

Chujekwu said: “Suspension of our traditional ruler, Igwe Peter Uyanwa, by the government of Anambra State, is intimidation to our community and display of high handedness by Governor Willie Obiano.

I remain the traditional ruler of this community and no one can remove me. I give respect to whom respect is due. If I talk I will die and if I don’t talk I will die, so it is better to talk and die

“Though a media house belonging to the state government said the certificate was withdrawn for some security reasons and based on actions or inactions of the traditional ruler, it was later gathered from reliable sources that Igwe Peter Uyanwa’s suspension was not unconnected with his stand on the 2021 governorship election in Anambra.

“If the information is correct, we urge Obiano to withdraw his action for the benefit of peaceful coexistence. “Every citizen of this country has the right to belong to any lawful assembly or political party of his choice; including choice of candidates or zone to support. Therefore, sons and daughters of Ukwulu kingdom residents in Malaysia do not find suspension of our traditional ruler any funny. We, therefore, urge our governor to reverse his decision on the monarch”

Anambra state Commissioner for Information and Public Enlightenment, Mr. C. Don Adinuba, said the Igwe suspension   was based on several petitions from the people of his community and beyond against the monarch.

A press statement issued by Adinuba reads: “Following a series of petitions against the traditional ruler of Ukwulu in Njikoka Local Government Area from many people in Ukwulu and elsewhere who want to forestall an impending huge crisis in the community, the Anambra State Government has decided to suspend Mr. Peter Uyanwa as the Igwe of Ukwulu for one year with effect from Friday, July 24, 2020, in the first instance.

“His Certificate of Recognition as Igwe is also withdrawn with

immediate effect. Consequently, Chief Uyanwa can no longer function as the Chairman of the Traditional Rulers Council, Anambra Central Zone. These actions have been taken in the public interest. The appropriate security agencies have been notified”, he said.