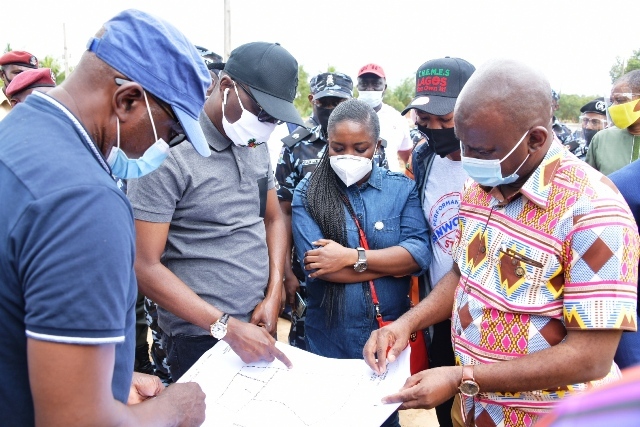 Lagos State Governor, Mr. Babajide Sanwo-Olu visited Badagry last Friday and his visit was heralded by a lot of funfair and ceremony by the people of the ancient town, reports Olanrewaju Akande

BADAGRY, Lagos, Nigeria – It was a heroic welcome for the Governor of Lagos State, Mr. Babajide Sanwo-Olu last Friday, as chieftains and members of the ruling party, the All Progressives Congress (APC) as well as the residents of the ancient city of Badagry, came out in thousands to welcome and familirise with the governor as he made his first visit to the city since his swearing in as number one citizen of Lagos State.

Though Governor Sanwo-Olu’s scheduled programme was an inspection tour of some facilities and projects in Badagry, the governor and his team got more than what they expected as people of the historic town came out in large numbers to express support for the governor and his administration. The elderly, youths and children in their hundreds lined up in different parts of the town waiving hands and shouting Sanwo-Olu as the governor moved round the city. Security agencies on the roads were not left out as they also saluted repeatedly to greet the governor.

The people of Badagry, who could not hide their feelings for having the opportunity to see their governor for the first time since his assumption of office on May 29, 2019, poured encomiums on Sanwo-Olu, with placards and banners bearing some inscriptions such as “Sanwo-Olu is our Governor!” “Welcome to Badagry” and “We love Governor Sanwo-Olu!” to express their appreciation and support for the person of the governor and the Babajide Sanwo-Olu administration in Lagos State.

As early as 9am on Friday, people had converged on the Avia-Igborosun Organic Farm in Mowo, to welcome Governor Sanwo-Olu to Badagry. The arrival of the Governor was heralded by loud ovation as his convoy drove into the farm. Sanwo-Olu, who dressed in blue jeans, ash colour T-shirt and a jacket with a face cap to match was accompanied on the visit by his Chief of Staff, Mr. Tayo Ayinde; the State Acting Commissioner for Agriculture, Ms. Abisola Olusanya; Special Adviser to the Governor on Tourism, Arts and Culture, Mr. Bonu Solomon Saanu and member of the Lagos State House of Assembly, representing Badagry I, Hon. Ibrahim Layode, among others.

Governor Sanwo-Olu after alighting from his car went straight to meet hundreds of women, men, youths and children as well as APC chieftains and members, who had patiently waited for his arrival at the entrance of the farm. The Governor interacted with the people for few minutes before entering the farm for business of the day.

The Governor was welcome to the farm by the Permanent Secretary of Lagos State Ministry of Agriculture, Dr. Olayiwole Onasanya and management and staff of the Avia Organic Farm and during the inspection. He later took a tour of the 279-hectare Avia Organic Farm, which was acquired by Lagos State Government in 2012 for commercial agricultural project. The tour reflects Sanwo-Olu’s administration’s special focus on Badagry, one of the five traditional divisions of Lagos State whose mainstay is agriculture, particularly aquaculture.

Agriculture falls under the fourth pillar “Making Lagos a 21st Century Economy”. To this end, Governor Sanwo-Olu is not leaving any stone unturned to ensure that his administration achieves the targeted goals. Therefore, the governor’s pilot agriculture scheme – Lagos Food Production Park – is to take off in Badagry, prompting Sanwo-Olu’s six-hour visit to the town on Friday.

The Governor during the tour spoke passionately on the need to revive the Avia Organic Farm, which has been abandoned for some times with some of the facilities already moribund. According to the governor, some of the agricultural projects to be developed for commercial production in the Organic Farm include fishing, poultry, piggery and agro-forestry, among others.

Speaking to journalists after the tour, which lasted for almost two hours, Governor Sanwo-Olu expressed the readiness of his administration to revive Badagry organic farm to boost food security in the State, adding that the government is fully ready to revive the abandoned farmland for the take-off of the State’s Food Production Park project.

The Governor also disclosed that Lagos State would be engaging private sector to secure an investment into the project, which, when completed, would create thousands of direct jobs and improve the wellbeing of the residents.

He said: “I have been fully briefed about this project but I considered it necessary to personally embark on this journey to Badagry in order to take assessment and see what exactly we need to do in terms of intervention. After taking a tour of the project site, what I observed is that the entire project looks more as a job that has not been completed. Therefore, we need to improve on the interventions to the Ministry of Agriculture.

“With very minimal resources, we have seen what the Ministry of Agriculture has done to keep the project afloat. Government will raise the resources and turn around this project to the level it should be. We will need to deploy more resources to revive and scale up all the machinery and systems already put in place. We will complete the project and open it for commercial production.”

The Governor said the revival of the Badagry Organic Farm and creation of more food production parks across the State were part of the strategy designed by his government to increase food security level from 20 per cent to 50 per cent, thereby raising Lagos’ food sufficiency.

He added that the project would give rise to similar agro-allied businesses that would open up Badagry’s economy for more growth, while also boosting its tourism business.

“Lagos is a big State in terms of population, but we also can intervene in our food production value chain. What we are also trying to do with the revival of the project is that, we want to produce various agricultural products we can consume internally in order to reduce our dependence on external food sources. The Food Production Park, which we are creating across the State, will be a trigger to other value-added agricultural production our citizens can provide,” he said.

As part of the move to turn around the Organic Farm, Sanwo-Olu promised a total rehabilitation of Igborosun Road that leads to the farm.

After completing the tour of the farm, Governor Sanwo-Olu drove in a long convoy with some party dignitaries, community and association leaders to other parts of Badagry town to inspect some projects.

As the governor’s convoy was heading towards Badagry town, Governor Sanwo-Olu was received with love in different parts of the town as people line up in large numbers beside the road, to catch a glimpse of the governor. During the tour, the Sanwo-Olu ordered his convoy to stop on two occasions to appreciate people who trooped out in large crowd to associate with him. First, Governor Sanwo-Olu, who was moved by the love shown to him by some children on the road shouting “Sanwo-Olu” and raising up placards “We love Sanwo-Olu,” stopped his convoy in the middle of the road to interact with the children. He also stopped his convoy at another location when he saw hundreds of people shouting “Sanwo-Olu” and waving their hands at him along Igborosun Road.

Governor Sanwo-Olu during his tour to the Badagry General Hospital inspected some projects, especially a 105-bed Mother and Child Care (MCC) recently completed by the Lagos State Government in the premises of the hospital.

Speaking during the tour of the hospital, the governor promised that the MCC will be commissioned in September. He also proposed an expansion of the Accident and Emergency Department. The project, he said, will take off in the next nine months.

Governor Sanwo-Olu also visited the Marina area of the Badagry town, where the State Government will be building a modern jetty. The project, according to Sanwo-Olu is part of his administration’s blueprint to promote waterways transportation across the State.

RESOLVING ACTS OF CRIMINALITY IN THE NIGER DELTA REGION

The hills and valleys before the new NCDMB Governing Council