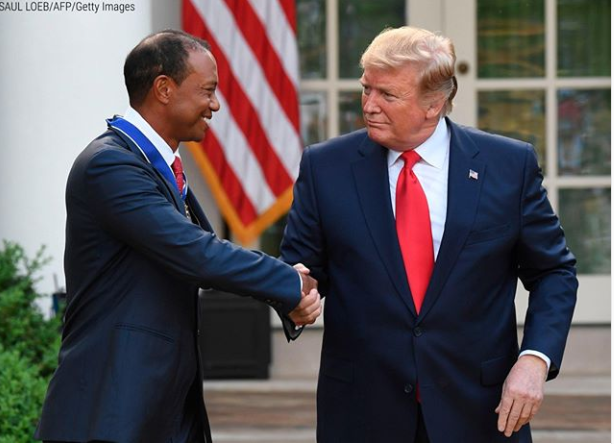 WASHINGTON, United States – President Donald Trump of the United States has presented the American golfer, Tiger Wood, the Presidential Medal of Freedom, calling him the champion golfer and symbol of American excellence, devotion and drive.

But he has gone through tough time prior to his return in 2019. His world came crashing in November 2009 when his marriage to Elin Nordegren crashed based on marital infidelity.

The golfer, allegedly slept with manager of a New York nightclub, Rachel Unchitel. Besides, he was also reported to have slept with at least 120 women due to sex addiction while he was still married to Nordegren, spending his hard earned income on women.

Eventually, Nordegren had to take her walk from the marriage with about £72 million in divorce settlement. It was as though things came crashing for Tiger Woods whose fortuned at a time was estimated to be in the region of £1.1 billion.

It was so terrible that he resulted to drug abuse. He slumped by his car that was idling in Florida due to heavy intake of pain killers. His image was gone and as the mailonline puts it, “this was the final humiliation in a ruinous decade, during which he not only lost his squeaky-clean image, his family, and at least £100 million in alimony and cancelled sponsorship contracts, but suffered such serious spinal injuries that doctors feared he might not walk again, let alone recover the form that made him arguably the finest golfer ever to swing a club”.

But after winning the masters last month, he seemed to be gaining what he lost in the past 14 years.

He has now secured sponsorship contract with Bridgestone and golf brand TaylorMade, and retains his £152 million-a-year partnership with Nike. No doubt, Tiger Woods is the symbol of the American spirit, never say die and indeed worthy of the Presidential Medal of Freedom.

Re-arrest of Adeleke: PDP alerts of plot by police to abuse court processes

5 PIPELINE VANDALS CAUGHT WITH 60,000 LITRES OF PETROL IN LAGOS