COSON SET TO CAMPAIGN AGAINST POLITICIANS WITHOUT PLANS FOR CREATIVE INDUSTRY 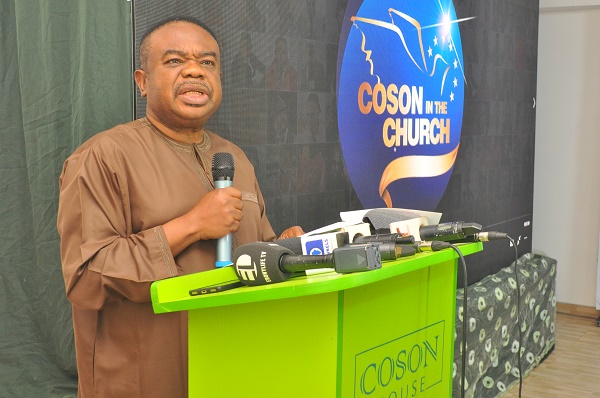 LAGOS, Nigeria – Copyright Society of Nigeria (COSON) has said that it will mobilize thousands of members across Nigeria and the millions of music fans who support COSON members to campaign against politicians who have no well thought out plans to deploy Nigeria’s creative talents for the development of the Nigerian nation.

Delivering the annual ‘State of the Music Industry’ address to musicians, investors in the music industry, intellectual property lawyers and the media at COSON House, Ikeja on ‘No Music Day’, September 1, 2018, COSON Chairman, Chief Tony Okoroji said,   “It is our firm belief that creative people in Nigeria cannot afford to keep quiet any longer as Nigeria goes through another electioneering campaign season in which politicians hop from one end of the country to the other but no one offers any direction for the development and optimal deployment of the millions of Nigeria’s creative talents for national development.

“Today, we wish to tell Nigerian politicians that we will not be taken for granted anymore and we will not help people canvass for votes who after getting into office will abandon the creative industry to suffer in an environment that completely discourages creativity.

“We are making it abundantly clear that it is only politicians who have developed a well thought out long-term plan for the progress of our industry and have shown clear interest in the development of the nation’s creative environment that can count on our significant support, the mobilization of our fans and their votes as elections approach. In the same manner, we will mobilize massively against those who have no plans to properly deploy the creative energy of young Nigerian people”

As has become the tradition, broadcast stations across Nigeria were requested by COSON not to broadcast music between the hours of 8am and 10am on Saturday, September 1, 2018 as a mark of solidarity with the nation’s creative industries which have suffered immensely from the debilitating infringement of copyright. Rather than broadcast music, most of the stations dedicated the 8 am to 10 am time belt to the broadcast of interviews, documentaries, debates and discussions which focussed on the rights of creative people and the potential contributions of creative activities to the national economy.

In an unprecedented communication masterclass, COSON on ‘No Music Day’ despatched over 60 top COSON members, Intellectual Property lawyers, and other music industry experts to diverse broadcast stations across Nigeria and the airwaves were bombarded with simultaneous discussions on “Copyright is Human Right” the theme of the 2018 ‘No Music Day’. Top notch social media activities on the same theme ruled the day as flags at the magnificent COSON House in Ikeja flew at half-mast.

“No Music Day” is traceable to that historic week in 2009 when Nigerian artistes of different persuasions embarked on a weeklong hunger strike staged in front of the National Theatre in Lagos. The hunger strike which was a result of the frustration brought about by the devastating level of intellectual property theft in the country was the prelude to what has become known as “No Music Day” in Nigeria.

For the first time in human history, the music industry in a nation called for the halt of the broadcast of music all over the country for a whole day, September 1, 2009. This action captured the imagination of the world and what is marked as “No Music Day” every year in Nigeria, was born.

In his ‘No Music Day’ address, Chief Tony Okoroji who spearheaded the 2009 hunger strike action said, “We wish to remind the different politicians and political parties canvasing for votes across the country that the disease which necessitated the hunger strike of 2009 has not quite been cured. At this time that other nations are building their economic growth on the creative and knowledge economy, Nigeria must take important steps to protect its creative industries to ensure the socio-economic progress of our nation”.

Okoroji who derided the politics of personalities that has enveloped the nation, called for politics of issues that attack the serious deprivations faced by the Nigerian people. Said the former President of PMAN, “We believe that the time has come for our music industry to go beyond simply providing entertainment but playing a key role in nation building.

“We cannot afford to give up as a nation despite the immense disappointments we have had. We must reinvent the Nigerian nation and speak truth to power. We believe that in this process, creative people in Nigeria must play a central role, stand up, take responsibility, work together, establish the strong advocacy necessary in every democracy to create positive change”.