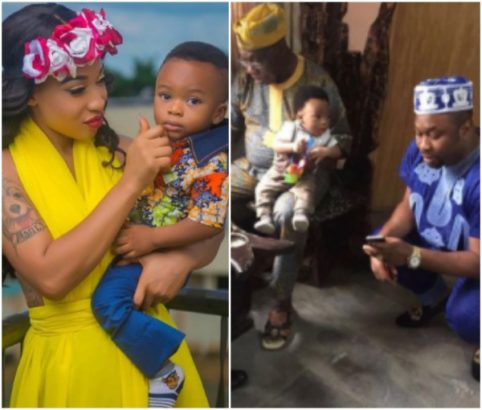 LAGOS, Nigeria – Nollywood actress, Tonto Dikeh has been hit with fresh controversy raising question about the paternity of her son. Photograph of her son sitting on the lap of former Nigeria’s President, Chief Olusegun Obasajo had surreptitiously found its way into the social media, via an instagram account, prompting many to insinuate that the her son is probably the grandson of the former president.

The instagram account had captioned the photograph: “The former president of Nigeria, Olusegun Obasanjo and his grandchild 100% cute”.

Not comfortable with the attribution, Tonto Dikeh who has always been in the news for one controversy or the other reacted, stressing that her son, King had no paternal link with the former president. She added that she thought Churchill was related to Obasanjo until she found out the truth. Photo: by Steladimokokurkus

PDP: CONFUSION IN APC, A REFLECTION OF CHAOS IN GOVERNANCE

AT 59, QUEEN OF MUSIC, MADONNA DEBUTS IN COMEDY WITH ARMY SCHUMER