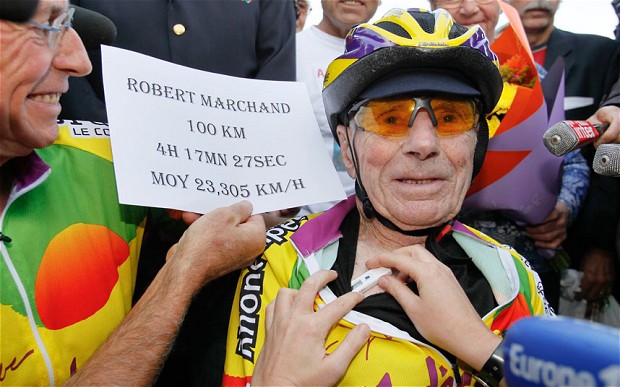 The record was created for him after riding 22.547 kilometres, about 14 miles in 60 minutes in his latest attempt at the Saint-Quentin-en-Yvelines velodrome outside Paris.

His distance fell short of the 26.927 kilometers (16.73 miles) he established in 2014.
Speaking after the show, he said, “I didn’t see the sign for the last 10 minutes, otherwise I could have gone faster,” Marchand told BFMTV.


Britain’s Sir Bradley Wiggins holds the outright mile record with a distance of 54.526km (33.88 miles). Robert Marchand was born November 26, 1911. He was a firefighter in Paris in the 1930. He worked as a lumberjack, gardener and wine dealer.

SANSUI OPENS UP ON NIGERIA’S LOSS TO NIGER IN NIAMEY