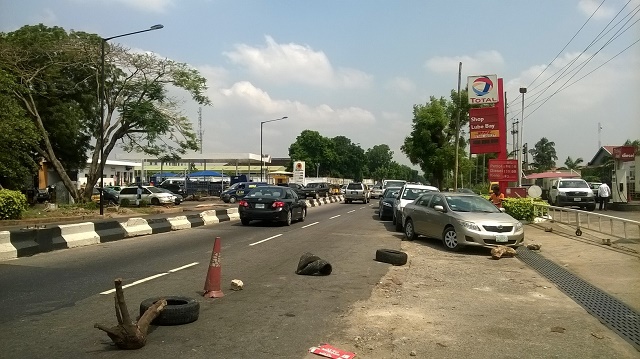 Nigeria, April 19, 2016 – Elongated fuel queues have persisted in Lagos State even as the Nigerian National Petroleum Corporation(NNPC) and major marketers intensified supply of Premium Motor Spirits(PMS) to petrol stations across the state and other areas.
Ad

Our correspondent reported that long queues were commonplace in all petrol stations that had the product, with many spending as much as five hours to get the product.

According to him, long queues were spotted at Conoil, Mobil, Capital Oil, Oando and many other petrol stations on the Lagos Ibadan Expressway and on the two petrol stations on Mobolaji Johnson Way, Alausa, almost from 7up to Total and queue for Oando extending up to the fence of the Lagos State Governor’s office.

He said that the situation resulted in heavy traffic gridlock on the Lagos Ibadan Expressway right from Capital oil to the Lagos State Secretariat.